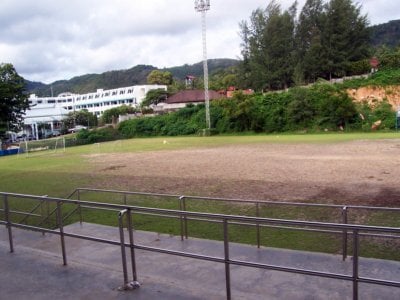 KARON: The poor state of the pitch at Karon Stadium has forced two international sporting events, the Phuket Soccer 7s and the King’s Cup 80-80 International Rugby Tournament, to be relocated.

After more than a month of the organizers voicing their concerns over the pitch, which in poor condition could result in player injuries, the Soccer 7s will be played at Surakul Stadium in Phuket City while the 80-80 rugby has been relegated to Sanaam Chai playing field, also in Phuket City.

While local authorities were deliberating whether to allow either tournament to be held at Surakul, which is often used for much smaller local events, Soccer 7s organizers Tim Hodgson and Alain Brulfert earlier told the Gazette, “Although our tournaments last for only one or two days, we are never granted permission to use Surakul Stadium as we may ruin the playing surface.

“There are few places suitable and in a safe condition. As organizers, we have a duty to take care of participants and ensure they are not exposed to an unsafe playing field.”

Earlier this year, the Rotary Club of Patong spent 1.2 million baht repairing the Karon pitch, bringing it up to the standard needed for international competition. According to Patrick Cotter of Phuket Vagabonds RFC, within six months the playing surface had returned to its previous condition and been rendered unsafe for the upcoming international rugby tournament to be played from November 16 to 23.

The tardy reaction by local authorities in resolving the Karon pitch debacle has prompted the organizers of both events to question whether international sporting events in Phuket are perceived as valuable, despite the Soccer 7s tournament next month alone bringing some 600 participants to Phuket in one of the largest tournaments of its kind in Southeast Asia.

In August, Adisak Hemyoo, honorary secretary of Thai Rugby Union (TRU), expressed concern over the state of the pitch at Karon Stadium due to it being used for local soccer tournaments. The high-impact nature of rugby requires a quality playing surface so that players are not injured, he said.

While doubts lingered over the state of the pitch in Karon, however, the number of teams pre-registering for the rugby tourney has tapered off from 10 to six.

Somjit Tammasate, chief of the Activity and Recreation Department of Karon Municipality, on October 5 assured the Gazette that the pitch at Karon Stadium would be ready in time for the sporting events in November.

“Karon Stadium is being fixed at the moment because the grass in the middle of the field was ruined. Right now it is about 50% complete. We are planting new grass so that the field can be used for the upcoming sports matches. The stadium has been closed since August to get it ready,” she said.

However, on October 10 Mr Cotter told the Gazette, “I was down at the pitch at Karon Stadium today and didn’t see any attempt to rectify the situation there. It will need substantial attention before it can be used for anything other than beach football. It will need to be fertilized, watered and probably seeded to make any impression.”