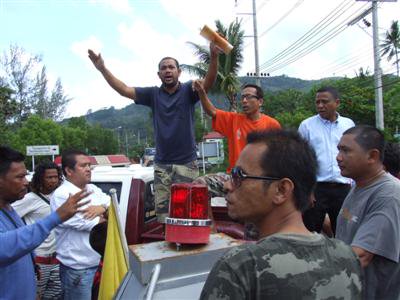 KAMALA, PHUKET: A 20-hour blockade of the Kamala-Patong Road ended at around 5:30pm yesterday after Phuket Vice-Governor Worapoj Ratthasima spent most of the morning negotiating a settlement.

The protest began at Kamala Police Station at around 7pm on Tuesday. By 9pm, a 500-strong mob had used vehicles to seal off the main road.

The roadblock inconvenienced many people, including tourists trying to get to Patong to celebrate St Patrick’s Day.

The protest was sparked by anger after police released on bail a man wanted for a slashing attack on 27-year-old Somsak “Big” Maisaphrao, who manages a row of rental houses on Soi Huakhuan.

Mr Somsak claimed that Lunglode Suepsin, 20, and three other men turned up drunk at the block at around midnight on March 6. Following an argument, they dragged him to the ground and hacked him several times with a sharp weapon.

He sustained wounds to his hand and arms requiring 200 stitches.

On the morning of March 7 he reported the crime at Kamala Police Station with relatives and gave police the identities of his attackers.

Accompanied by his uncle Sommit Suepsin, a member of the Phuket Provincial Administration Organization, Mr Lunglode turned himself in to Cherng Talay Police Station at 3pm on March 17. He was charged with assault and bailed out by his father, police said.

Leading the protesters was Kamala Tambon Administration Organization President Jutha Dumluck, who criticized the Kamala Police Station as being unfair in allowing his release.

Mr Lunglode was initially never charged with assault and police released him without informing the victim, according to Mr Jutha’s version of events.

“Somsak’s relatives told police that with Mr Lunglode out on bail Somsak’s life was in danger, but police just told them that nobody knows what the future holds,” he said.

The protesters’ demands included that all officers connected with the case be transferred from Kamala Police, that the perpetrators of the crime be arrested within one day and that all protesters be immune from prosecution.

By 1pm, an agreement had been reached to put the matter before Phuket Provincial Court.

The protest dispersed at around 5.30pm yesterday. Mr Lunglode and at least two other suspects are now in police custody.