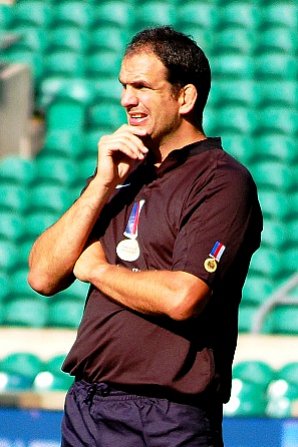 PHUKET: Rugby fans in Phuket have been informed that Martin Johnson has thrown in the towel as England manager after three-and-a-half years leading the country’s international rugby union side.

Several off-field controversies and a wretched performance at the recent World cup in New Zealand, where his charges lost to France in the quarter-final, combined to force Johnson to stand down.

“I have a choice at the moment. If I hadn’t made that decision, someone may have made it for me.”

“I think it is in the best interests of both the England team and myself not to carry on,” said Johnson.

Johnson led England to victory in the 2003 World Cup and won 84 caps for England as a player. His tenure as manager was not as impressive, with only 21 wins and one draw from 38 matches managed – a win rate of just 55.3%.

Johnson had no previous top-level coaching experience when appointed to the position of England manager in April, 2008.

“The cycles are from World Cup to World Cup, and you have to decide whether you are prepared to jump in for four years and wholly commit yourself to that job. I’m not.”

Johnson’s departure comes a few days after Mike Tindall was expelled from the elite player squad and fined following a misrepresentation of a team night out in New Zealand.

New Zealand’s 2011 World Cup-winning coach Graham Henry is thought to be in the frame to take over the role left vacant by Johnson.

Northampton coach Jim Mallinder has confirmed he would be interested in the role.

Two former South Africa coaches, Jake White and Nick Mallett, have both ruled themselves out for consideration.