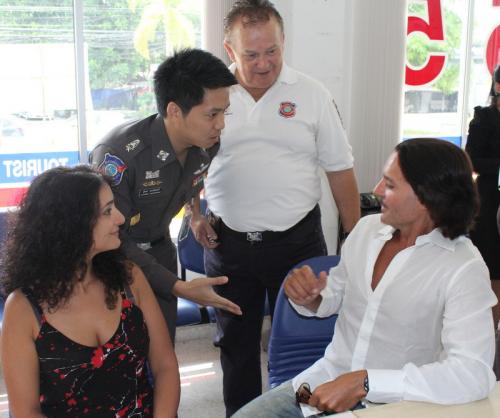 PHUKET: An Italian couple who lost their way while sight-seeing at the Khao Phra Thaew wildlife sanctuary in Thalang were recovered safely on March 27.

Meiko Parisani and Valentina Bolognini entered the park at about 3:30pm, hoping to see the Ton Sai Waterfall, but soon lost their way.

“We were very scared. We saw a monkey with big teeth, it was very scary. We only had flip-flops on, too, which is not good for walking in such a forest,” he said.

“We did not know what to do. We decided to walk back along the track as it was getting dark… In our country, the trees are marked so we know which way we can go back. I did not see one here, so we stopped and called the company we rented the car from for help,” Mr Parisani said.

The car company in turn notified the Phuket Tourist Police of the lost tourists.

“We received the report, so we contacted our Italian volunteer to ask them their location, but they could not tell us where they were,” Lt Col Urumporn Koondejsumrit said.

The Tourist Police then called in Awat Nitikul, chief of the Environmental Conservation Unit, for help.

“Our officers found them after an hour and a half looking for them. They were waiting for us at nature observation station number 8,” Mr Awat said.

“The station is about 600 meters from our office. It was very good that they were able to call the car rental company to organize a search party once they realized they were lost,” he added.

Grateful for the efforts by the officers, Mr Parisani and Ms Bolognini arrived at the Phuket Tourist Police headquarters in Phuket Town the next morning to thank all involved in the rescue.

“We are very happy we could get out of the forest. We would like to thank Italian Tourist Police volunteer Sergio Bongiovanni, the Tourist Police and the officers at Khao Phra Thaew wildlife sanctuary for rescuing us,” Mr Parisani said.