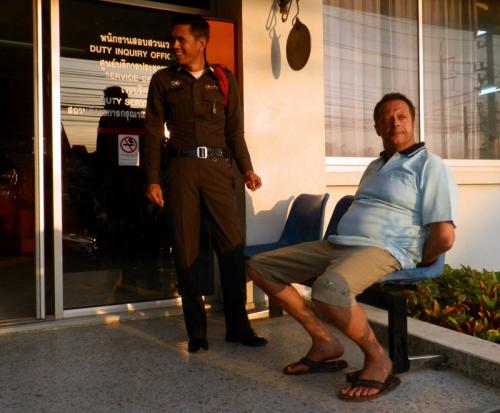 PHUKET: Police arrested an Italian man who stole a BMW that was left running in front of a laundry shop near Phuket Technical College yesterday.

Responding to a report from Surawit Siangdee, 36, that his black BMW had been stolen at 3:30pm, Phuket City Police notified police stations island-wide.

Thalang traffic police spotted the car, with mag wheels and lowered suspension, at traffic lights on Don Chom Tao Road at 6:30pm. The officers stopped the vehicle and apprehended the 46 year old man, who was reportedly not wearing any clothes at the time of his arrest.

After convincing him to get dressed, the officers took him to Thalang Police Station, Phuket City Police chief Sermphan Sirikong told the Phuket Gazette.

“We tried to talk with him, but he wouldn’t say anything, he just sat and covered his head,” Col Sermphan said.

The Italian’s arrest came just 24 hours after Thung Thong Police, concerned for his safety, stopped him from jumping into Bang Wad Dam.

The officers took him to Thung Thong Police station, from where he disappeared a short time later, officers told the Gazette.

In the meantime, the Italian has been charged with theft, he added.

The Phuket Gazette are aware of the man’s name but have decided to withhold it.