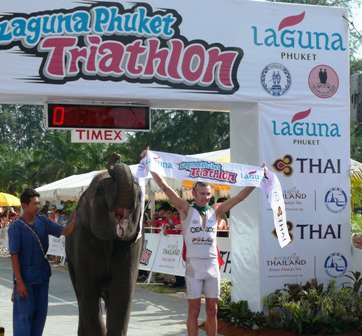 Speaking to the Phuket Gazette, a very composed Cigana expressed satisfaction with his race.

“This was my kind of weather – perfect for me. The course is beautiful, but quite difficult and I really had to push going over last part of the run. My bike split time was good and my ankle injury didn’t flare up, so I’m very happy to have won my third title,” he said.

Cigana will spend a week recovering in Phuket before taking on the longer Ironman 70.3 event next week.

“Next week will be much more difficult. There are a number of very strong competitors so I’m aiming for a top 10 finish. I’ll be pleased with that result,” he added.

Alberto Cassadei took the runners-up place four minutes behind his compatriot in a time of 02:36:56.

Romain Guillame pushed Cassadei all the way to the line, but couldn’t close the gap, taking third in 02:37:08.

Belinda Granger’s forecast to the Gazette yesterday did indeed come true with Radka Vodickova of the Czech Republic winning her second title in a time of 02:54:18 ahead of the ever-smiling Granger who finished in 02:57:33.

Director of Golf at Laguna, Tim Haddon can officially call himself a triathlete this evening having crossed the finish line with his son and into the welcoming arms of his wife.

A huge gathering of Tri Tim supporters faithfully waited for 05:28:22 to see six months of hard work come to a successful conclusion.

“I just want to thank everyone who helped me get here. All my supporters and my family, but especially Darren Hancock (Manager of RPM gym),” said Tim.

The Phuket Gazette and PGTV are sponsors of the 2011 Laguna Phuket Triathlon and wish to congratulate all who took part in the event.