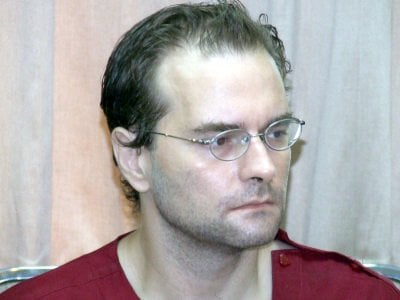 PHUKET: Retired US Navy serviceman Ronald Fanelli, who confessed to stabbing to death bar hostess Wanphen Pienjai last month, described the killing as a “terrible accident”, saying he never intended to harm her.

Clean-shaven and appearing somewhat disoriented, Ronald Fanelli, 37, was presented in handcuffs to the media at a press conference chaired by Phuket Provincial Police Commander Pekad Tantipong at 9am today.

On the table in front of him were a pair of camouflage shorts he was wearing at the time of the murder, the switchblade used to kill Wanphen and a small bag belonging her, as well as a mobile phone and SIM card.

Other evidence seized by police, but not presented today, included a foam mattress and the motorbike used to dispose of Wanphen’s body, which was stuffed into a large suitcase and dumped in a remote part of Wichit, several kilometers from Mr Fanelli’s rented home, also in Wichit.

After a brief statement outlining the details of the case, Mr Fanelli told the press flatly, “I killed her.”

He had been treated fairly by police, he added.

The atmosphere at the press conference was somber, with many officers showing sympathy to Mr Fanelli, who now faces the rest of his life behind bars in a Thai prison.

Police also explained to him that pleading guilty to a murder charge customarily leads Thai judges to commute a death sentence to life imprisonment.

Mr Fanelli, originally from New York and a former US Navy lieutenant who served aboard the USS Nevada, said he came to Thailand about three years ago and has lived here since.

Asked if he were the same Ronald Fanelli who was a former professional poker player who gambled in tournaments under the name “MadYank”, he laughed briefly with a tone of bitter irony before replying, “Yes, but that was a long time ago.”

Mr Fanelli declined to comment on the motive for the murder, asking reporters to read his statement to police.

Phuket City Police Superintendent Wanchai Ekpornpit told reporters after the press conference that several factors appeared to have contributed to Mr Fanelli’s mental state at the time of the stabbing: he was drunk; his Thai wife had left him and taken their young child back to her native Maha Sarakham province in Isarn. He had also recently lost his Internet connection, he noted.

Altogether, this caused the former sailor to “snap” when Ms Wanphen approached him playfully in his bedroom asking for sex, Col Wanchai said.

Mr Fanelli stabbed Ms Wanphen once in the back then again in the chest, Col Wanchai added.

Mr Fanelli was drunk at the time of his arrest and the exact timing of events remains unclear, Col Wanchai said, but added that it appeared Wanphen had stayed with him for about one day before she was murdered.

In a re-enactment of the murder carried out earlier, Mr Fanelli told officers that he carried the suitcase in front of him while he rode his motorbike to where he dumped Wanphen’s body off Chao Fa Thani Rd in Wichit.

Ms Wanphen’s wrists and ankles were found broken, apparently so her body could be stuffed into the suitcase.

The re-enactment also revealed that Mr Fanelli returned home and hid the switchblade above the gypsum tile roof, then rented a house in Kata to avoid detection by police.

Phuket Police were under intense pressure to bring Ms Wanphen’s killer to justice.

High-ranking officers at the Royal Thai Police Headquarters in Bangkok as well as Region 8 commanders in Surat Thani had taken a strong interest in the investigation and were sent frequent updates, Maj Gen Pekad said.

The murder sent shock waves throughout the bar industry across Phuket, with “mamasans” taking extra precautions to screen potential customers.

Prostitution is illegal in Thailand, but enforcement of anti-prostitution laws is rare in cases involving consenting adults.