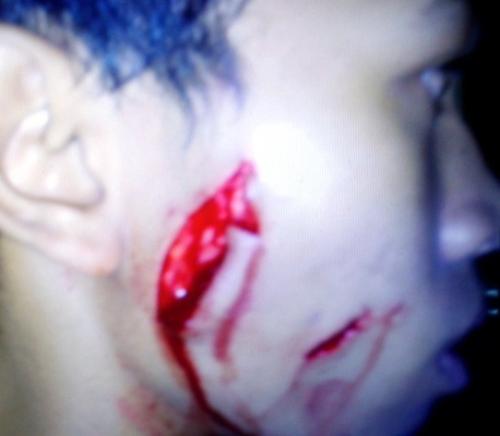 Khalili Sina allegedly smashed a broken beer bottle over the head of Muhammad Manoch, 21, and slashed his cheek.

The incident happened on Rat-U-Thit 200 Pi Road in Patong at about 12:45am, Lt Col Jongserm Preecha of the Patong Police said.

“Witnesses said Mr Manoch was hit on his head and had his right cheek slashed with a broken beer bottle,” Lt Col Jongserm explained, adding that Mr Sina had allegedly been drinking at a bar before the fight.

“Mr Sina was driving the jeep and parked it in front of a nightclub. He got out of the car and went into a nearby convenience store while his wife waited in the car. Mr Muhammad, who works as a car park service operator, noticed the jeep was blocking the entrance to his parking area, and told Mr Sina’s wife to move it,” Lt Col Jongserm said.

Mr Muhammad noticed the car’s engine was still running so he tried to move the vehicle himself, Lt Col Jongserm explained.

When Mr Sina returned from the convenience store, he confronted Mr Muhammad.

Mr Sina was treated for cuts on his left hand and fingers.

The 30-year-old Iranian, in Phuket on holiday with his wife, has been charged with assault.