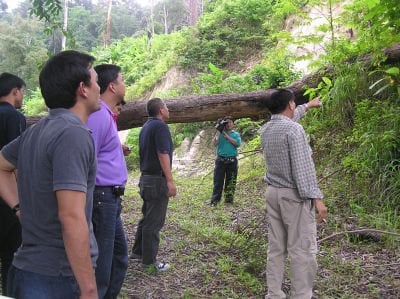 Phuket City: Police from Bangkok and Phuket, and officials from the Land Development Department (LDD) today examined 14 plots of land in the Punturat Hills, next to the bypass road, that are suspected of having illegal land documents.

In the morning, police and LDD officials checked the land papers over which doubts have been raised because some of the land appears to be in national forest, some in areas earmarked for SorPorKor 4-01 tenancy and some on slopes of more than 35 degrees from horizontal, which by law is state land.

In the afternoon the investigation team surveyed the land using GPS equipment and confirmed that three points at which readings were taken were in national forest.

Viboon Suksomsonk, the LDD’s Chief Survey Officer, said, “From the initial checks we made we know that a lot of this land is in national forest.” The survey will continue tomorrow.

Pol Col Koranwat Parnprapawat, of the Bangkok-based Crime Suppression Division, said that once a full survey is completed, the evidence will be handed over to the LDD for any fake deeds to be canceled.

Charges will then be brought against the supposed landowners and any Provincial Land Officials found to have been involved in issuing illegal land papers.