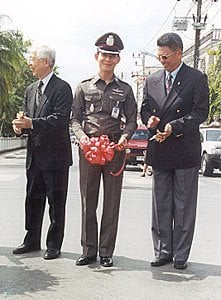 PHUKET TOWN: The island’s capital stepped up to a new level of technology yesterday with the switching-on of an “intelligent” traffic light system at the intersection of Thepkrasattri Rd and Komarapaj Rd. Phuket Town Mayor Phummisak Hongsyok explained that the Komarapaj Rd intersection is the location of the town’s longest traffic delays, which was why it was chosen for trials of the Rondo traffic light system, made and installed by Sumitomo Electric Industries Ltd of Japan. Mayor Phummisak explained, “Rondo is an automatic control system. It uses image processing cameras to count the numbers of vehicles in the various lines and assess the lengths of the lines, and a sonic echo system to work out how busy the traffic is. “Using this information it calculates suitable periods of time for a green light [in a particular direction].” Mayor Phummisak added that if the Rondo solution works well at the Komarapaj Rd intersection, it will be applied at other problem intersections in Phuket Town. Yutaka Hanazaki, Chief Engineer of Sumitomo Electric, told the Gazette, “The traffic in Phuket Town does not flow well, which is why we installed the system. We have installed it at intersections in Chiang Mai as well.” The system had also been introduced in Bangkok, he explained, but traffic there was of much higher volume. “It cost a lot to install Rondo in Bangkok, because the system is better suited to medium-volume traffic, like in Phuket. It’s easier to do it.”