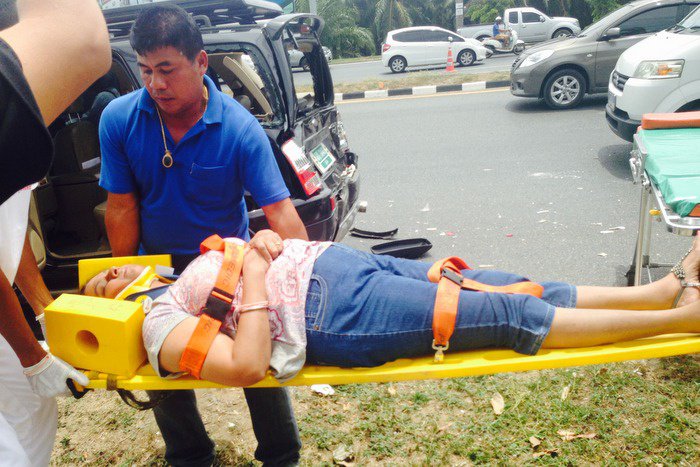 PHUKET: Three Indian tourists were injured when a tour bus slammed into a taxi and a pick-up truck south of the Heroines’ Monument on Thepkrasattri Road yesterday.

The taxi, carrying an Indian family of three, and the tour bus, which had just dropped off a group of Chinese tourists at Phuket International Airport, were travelling southbound on Thepkrasattri Road when a pick-up truck with a boat trailer started to make a u-turn in front of the Jee Teng House near the Isuzu dealership.

“I had just picked up the family and was taking them from Mai Khao to Phuket Town. When I saw the pick-up truck making the u-turn, I slowed down. Then, suddenly, a tour bus slammed into the back of my car,” 48-year-old taxi driver Amnuay Wongsarattanawut told the Phuket Gazette at the scene.

Gayathri Raya Peter, 53, sitting the back seat of the taxi, had to be carried out of the vehicle by Kusoldharm Foundation rescue workers. Mrs Peter, and her husband and son, who both suffered minor injuries, were taken to Phuket International Hospital.

Mr Amnuay, who hit his head on the steering wheel during the crash, was taken to Vachira Phuket Hospital.

The tour bus driver, Leatchao Khinthon, 35, blamed his brakes for the accident.

“I saw the pick-up truck with the trailer making the u-turn after I noticed everyone slowing down,” he said.

“I tried to slow down and avoid hitting the taxi, but my brakes weren’t working and I hit the back of the trailer.”

“I just finished making the u-turn. Next thing I knew, the bus hit the taxi and then continued on and hit my trailer,” he said.