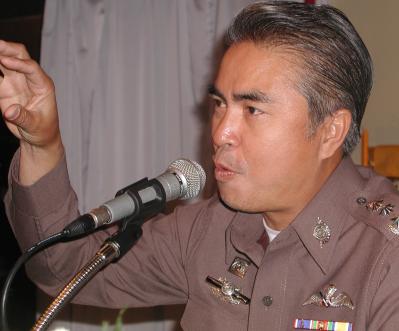 PHUKET CITY: The Immigration Police have launched a project in Phuket that will eventually allow hotels and homeowners all over Thailand to report required data about their guests via the Internet.

The project is intended to help combat terrorism and monitor the movements of suspicious foreigners visiting Thailand.

Following refinement of the pilot project in Phuket, the system will then be launched in Chiang Mai. It is expected to be implemented nationwide some time next year.

The underlying database will also be linked to intelligence networks overseas.

Once the system is up and running, hotel staff will log on to the Immigration Police website and enter 24 items of information about each guest who checks in.

During the initial trial period, however, hotels and guesthouses will have to submit the data in a spreadsheet by email to: phuket_imm3@police.go.th

Immigration went public with the project at a training seminar yesterday at the Pearl Hotel, attended by about 170 hotel staff. The training was organized in cooperation with the Phuket Tourist Association (PTA).

“We need the public’s cooperation on this because we already have about 700 names on our terrorist blacklist.”

Section 38 of the Immigration Act 1979 requires homeowners and hotels providing accommodation to foreigners to notify Immigration within 24 hours of their guests’ arrival.

Hotels should be able to start submitting the required data immediately after their staff complete the one-time training session, he said.

Those failing to comply are subject to an 8,000 baht fine. In the past the law was seldom enforced but once the new system is functioning properly, Immigration Police plan to crack down on violators.

Pol Capt Krissarat Nuesen, Deputy Inspector of the PIO, told the Gazette that additional training sessions may be held in the future if necessary, but added that the PIO might have to seek outside funding in order to pay for them.

Pattanapong Akevanich, Chairman of the Phuket Tourist Association (PTA), said that the training session was useful. In the past, he noted, mistakes often resulted from the need to hand-write the information. Entering the required data via the Internet would allow hotels to provide more complete and accurate information.

K. Pattanapong accepted the need for better enforcement of the reporting requirement. “There are some ill-intentioned visitors coming here, so we must be careful. This is not just in regard to terrorism, but also to help prevent economic crimes, trafficking in human beings, passport forgery and other crimes.”

Gov to talk fast for B2bn