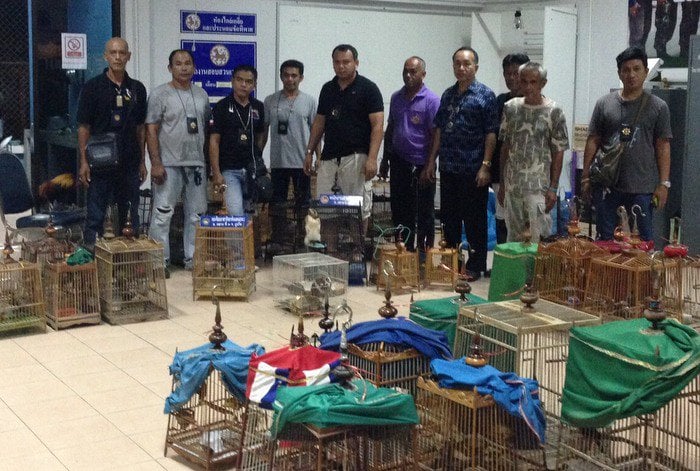 PHUKET: A raid on a local kratom dealer in Thalang uncaged a number of wild birds during a series of busts in an effort to combat drugs in the district.

“We had been observing her for sometime and were aware that she was dealing kratom. So we established a sting operation and had someone buy 200 baht’s worth of the drug from her,” said Mr Veera. “After her arrest, she confessed to being supplied from Surat Thani and selling the drug to teenagers on the island.”

Ms Chabaprai was charged with possession of a Category 5 Drug with intent to sell.

“During the raid, we noticed that one of Ms Chabaprai’s neighbors had an unusual number of caged birds,” Mr Veera said.

Mr Piyapan was unable to produce the necessary documentation to prove that he could legally possess such birds.

“He was charged with hunting wild animals and protected species, and the illegal possession of protected wild animals,” Mr Veera said. “He confessed to the crimes and was taken to Thalang Police Station.”

Officers also seized six red-whiskered bulbul from a nearby house. However, nobody was in the house when officials arrived.

Nattapong Leejarern, 30, was arrested with 1.2kg of kratom and a bottle of kratom juice. He was charged with possession of a Category 5 Drug.

Also in the house with Mr Nattapong was Mr Udom Chanojuti, 40, who was arrested for illegal possession of seven red-whiskered bulbul and two white-rumped shama.

The final arrest of the night was yet another alleged kratom dealer: 60-year-old Banjob Meenon. She was arrested with 6.2kg of the drug and charged for possession of a Category 5 Drug with intent to sell.