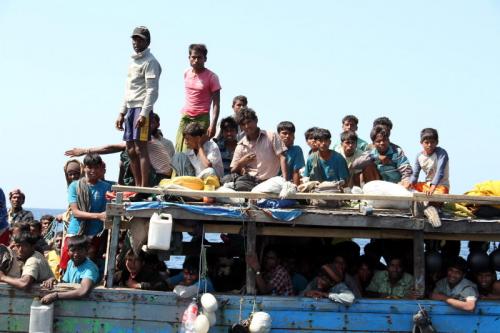 “Rohingya fleeing Burma should be given protection, not shot at,” said Brad Adams, Asia director at Human Rights Watch.

“The Thai government should urgently investigate why sailors opened fire on boat people helpless in the sea and prosecute all those found responsible.”

According to the press release, survivors of the incident told HRW that on the morning of February 20, Thai fishermen helped their drifting boat ashore on Surin Island off the coast of Phang Nga province.

On that same day, at about 6:30pm, Thai navy patrol boat TOR214 arrived at the island and towed their boat back to sea. The patrol boat and the Rohingya boat arrived near a pier in Kuraburi district, Phang Nga, at around 5am the next day.

According to the survivors and Thai villagers on the shore, navy personnel from the patrol boat began to divide the Rohingya into small groups in the boat and ordered them to get ready to board smaller boats.

At that point, the Rohingya became uncertain whether they would be taken to immigration detention on the mainland or be pushed back to sea. When the first group of 20 Rohingya was put on a smaller boat by the Thai navy, some panicked and jumped overboard, said the report.

“Navy personnel fired into the air three times and told us not to move,” one survivor told Human Rights Watch. “But we were panicking and jumped off the boat, and then they opened fire on us in the water.”

Four Rohingya who swam to shore were rescued by local Thai villagers. Thai security forces searched the area for two days after the incident, but the villagers kept the survivors hidden.

The bodies of two Rohingya reportedly showing bullet wounds were later pulled from the sea and buried in a Muslim cemetery in Kuraburi district, said HRW.

Thai fishermen told Human Rights Watch they saw more dead bodies in the water but had no more information. The fate of the remaining passengers on the boat remains unknown after it was towed away by the Thai navy.

Human Rights Watch called on the Thai government and the National Human Rights Commission to conduct thorough and transparent investigations into the shooting. If unnecessary or excessive force is found to have been used, all those responsible, including officers who gave orders to fire, should be prosecuted, Human Rights Watch said.

“Whenever the use of force is unavoidable, they must use restraint and act in proportion to the seriousness of the offense. The intentional lethal use of firearms may only be made when strictly unavoidable in order to protect life,” said the press release

Vice Admiral Taratorn Kajitsuwan, Commander of the Third Naval Area, who is responsible for all naval operations along the Andaman coast declined to comment on the story to the Phuket Gazette.

One media report quoted him as saying that he refused to comment because the story only served to “tarnish the reputation of the Royal Thai Navy”.

Likewise, one of the top-ranking officers at the Kuraburi District Police declined to comment in detail about the incident, saying, “I am aware of this story. It is only a rumor to discredit Thai officers. There was no such shooting.”

The officer, who asked not to be identified, did not disclose how he became aware of the story. He also offered no explanation as to what investigation – if any – had proved the rumors to be untrue.

Surin National Park Chief Rattanachart Noikondee told the Gazette he received no reports from park rangers or from villagers living within the park of any shootings.

Phang Nga MP Kantawan Tanthien, quoted by one news report as recently as Monday confirming that the shooting took place, today was unavailable to confirm the report to the Gazette.

MP Kantawan would be “unavailable for days to come”, the Gazette was told.

However, the senior Kuraburi District Police officer the Gazette spoke to did confirm that two bodies were pulled from the water in the same area at about the same time as the alleged naval shootings.

The condition of the bodies made it impossible for police to determine whether or not the men were shot, said the officer.

“In fact, we are not sure if the bodies were Rohingya or Burmese fishing boat crew,” he said.

The bodies were sent to Kuraburi Chaipat Hospital for further examination. Hospital staff there told the Gazette that post-mortem examinations, including x-rays, failed to produce any evidence of bullet wounds.

“The bodies were then handed back to the authorities,” one staffer who declined to identified, said.