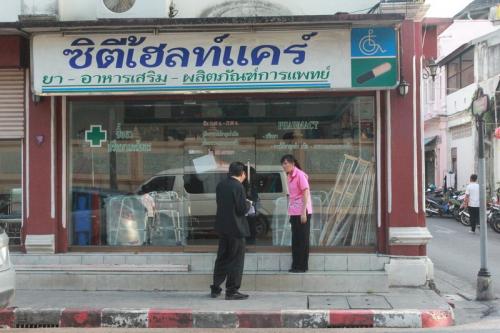 PHUKET: An unlicensed pharmacist in central Phuket Town has been charged with illegally selling abortion pills after being caught in an undercover operation carried out by Ministry of Public Health officials.

A complaint filed directly to police in Bangkok resulted in the sting operation on the City Health Care pharmacy, on Dibuk Road, near the junction with Soi Romanee, late yesterday afternoon.

“One of our officers who is three months pregnant entered the store and asked to buy abortion pills. The pharmacist gave her the pills and charged her 16,000 baht,” Ministry of Health legal officer Chatree Pinyai explained.

The pharmacist was charged with selling illegal medication, selling unapproved medical equipment and for practicing as a pharmacist without a license, Mr Chatree confirmed.

Pasit Sakdanarong, adviser to Health Minister Pradit Sintavanarong, was in Phuket to personally oversee the operation.

“A local resident filed a complaint to the Consumer Protection Division of the Royal Thai Police [in Bangkok], claiming that the pharmacy was selling abortion drugs as well as medical equipment not approved by the Medical Device Control Division of the Food and Drug Administration,” Mr Pasit explained.

“The Ministry of Public Health has ordered the Provincial Public Health Office in every province to crack down on pharmacies and to carefully examine whether they are selling drugs and medical equipment legally,” he added.

“The Phuket Public Health office has been ordered to conduct random checks on pharmacies throughout Phuket. We will press serious charges against any persons found breaking the law.” he warned.