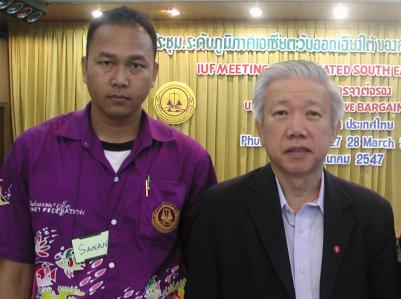 PHUKET CITY: For members of local hotel labor unions, the question of who gets service charges was high on the agenda at a recent international meeting of labor officials in Phuket. Regional representatives of the International Union of Food, Agricultural, Hotel, Restaurant, Catering, Tobacco and Allied Workers’ Associations (IUF) gathered at the ST Hotel on March 27-28 to discuss collective bargaining strategies. About 80 delegates from unions in countries including Malaysia, the Philippines, Cambodia, Indonesia and Korea joined the annual event, held in Thailand for the first time this year. It was hosted by the IUF’s local affiliate, the Phuket Federation of Hotel and Service Labor (FHSL). Among the issues discussed was the lack of government regulation on the disbursement of the 10% service charge collected by hotel food and beverage outlets, said Vijit Dasantad, President of the Phuket FHSL. For many hotel staff, income from service charges during the high season can equal or even surpass the normal monthly salary. But only if hotels choose to pay it, he said. “Some employers [the hotels] just keep it for themselves,” he told the Gazette. “We are not [ready] to protest this yet,” he added. “We are just exchanging opinions and trying to find a solution. Our normal approach is one of compromise. What we expect from employers is understanding of our work and of our rights.” This is not to say that the FHSL is a stranger to protest and confrontation. In Patong last October it organized a protest march to show solidarity with 110 former workers from the Diamond Cliff Resort and Spa, who were laid off the previous May. Among those handed their cards were all the members of the hotel’s union committee. A month later another 22 staff, including members of a new union committee, were fired, just hours after the committee had been elected. Also attending the seminar was Ma Wei Pin, the IUF’s Australia-based Secretary for the Asia-Pacific region. He told the Gazette that principles of “right and wrong” were always an important element in employer-employee relations. “The laws are there to be respected; they are there as the bottom line. Above that, however, there are matters that are subject to bargaining and compromise by both sides,” he explained. K. Vijit told the Gazette that Phuket was chosen to host the event because there are unionized staff in 20 island hotels, the highest number in Thailand. Phuket currently has 549 “accommodation establishments” registered with the Tourism Authority of Thailand.