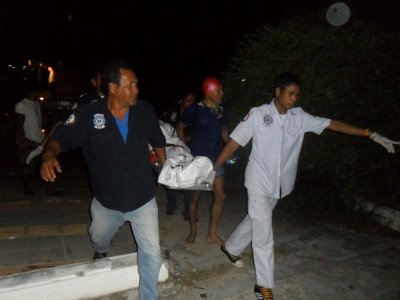 Kasin Wirachod, 41, employed by a prominent Karon hotel, supplemented his income by catching fish in the lake, an old tin mine quarry surrounded by resorts and restaurants.

Mr Kasin, originally from Sakon Nakhon, was setting nets with a friend – identified only as “Dum” – at about 7pm.

After completing part of their work, Mr Dum went to buy alcohol to combat the cold, the Phuket Gazette was told.

Mr Dum returned to see a foreign tourist swimming out to help Mr Kasin, who was in the water shouting for help as the long-tail boat they were using was sinking.

Despite the efforts of the tourist and Mr Dum, both the boat and Mr Kasin were lost.

A number of local authorities were called in to help recover the body, including Chalong Police, Marine Police, members of the Phuket Ruam Jai and Kusoldharm rescue foundations, Karon Disaster Prevention and Mitigation Officers, and even officers from the Royal Thai Navy Third Naval Area Command.

However, the recovery effort was hampered by underwater currents – the lake is a confluence where a freshwater stream from the hills to the east meets an inflow of seawater at high tide – and low visibility brought on by darkness.

His body was taken to Vachira Phuket Hospital for medical examiners to determine the exact cause of death.

Mr Kasin is survived by his wife, who is from Karon.