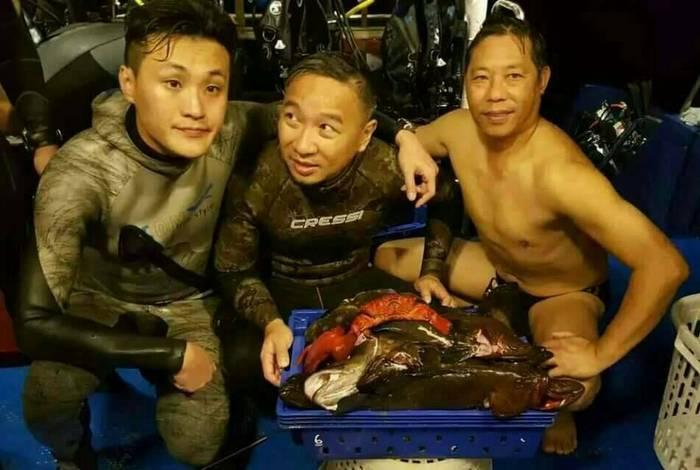 PHUKET: Photos of Hong Kong spear fishermen showing off the bounty they hunted in the waters of the Andaman caused an uproar on social media as those online made allegations that they had been fishing in Similan National Park, Thailand’s top diving destination.

Panunee, the boat that the tourists were hunting from, is touted as a 5-star luxury liveaboard. The company itself, Panunee Sea Master Co Ltd, recently announced its plans to move their base of operations to Indonesia, effective in June 2016.

“All of the paperwork for Panunee is in good order. However, we are further investigating the matter,” Nut Kongkasorn, chief of Mu Ko Similan National Park, told the Phuket Gazette today. “There are two central factors to the case that need to be looked into: one, were they fishing in national park waters, and two, as Panunee is registered as a dive boat, what are the legal consequences of having fishing equipment on board.”

Representatives of Panunee are working closely with officials in the investigation, said Mr Nut.

The company’s sales manager, Walaiporn Khomson, assured the Gazette that they were taking the issue seriously.

“I was shocked when we were told about what happened,” said Ms Walaiporn, who is currently working in Japan. “We quickly called our staff to determine what happened, because it was a diving trip and we do not permit fishing activities.”

The group of tourists allegedly booked a Similan diving trip through a Hong Kong agent from March 29 to April 3.

“They refused to accept that we couldn’t take them fishing. Our captain did not contact us, as we are in Japan, so he decided to take them outside of the national park area so they could fish,” said the statement.

“We have been part of the diving industry for decades. Diving has given us great opportunity and we are doing our best to preserve the industry for future generations. We promise we will not be involved in any such matters in the future.”

No charges have been filed against anyone at this point, as officials are continuing their investigation, confirmed Mr Nut.