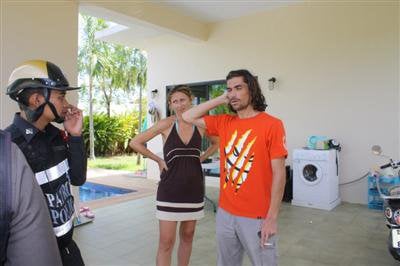 PHUKET TOWN: Chalong Police are hunting for the owner of a ‘beer bar’ who allegedly drove his Toyota Fortuner into the house of a former friend, then entered the home and began smashing property.

When Chalong Police arrived at the house on Soi Saiyuan in Rawai around 2pm yesterday, they found 31-year-old Gabriel Troisgros in a state of shock.

Mr Troisgros told police a former friend had phoned him several times starting from 6am that morning, insulting him in crude language.

The calls continued until the man appeared outside the house in a Black Toyota Fortuner, which he rammed repeatedly into the home’s sliding door, destroying it, Mr Troisgros said.

The attacker, an owner of a beer bar in Rawai, then entered the house with the intention of destroying property. A fight started and a mirror was smashed before the man fled in the vehicle, Mr Troisgros said.

Mr Troisgros said he had been a close friend of the man until about three months ago, when the pair fell out.

Other details, such as the nationality of the attacker or what sparked the incident, were not reported.