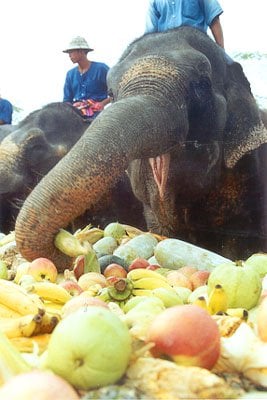 CHALONG: The elephants partied big on Friday, and it was the kind of celebration that none of them will ever forget – especially Boonma, the hijacked jumbo. Chokchai Sertpradit, General Manager of Island Safari on Chao Fa Rd West, told the Gazette that Boonma, an adult female, had just returned home after being stolen late one night last month. “We found her in Pa Khlok,” he said. “She had been left there all alone. The thieves must have fled.” Boonma, looking none the worse for her adventure, tucked into apples, sugarcane, bananas, watermelons, pineapples, and guavas – there were three tons of goodies to share among the 25 pachyderms at Island Safari. “We invited lots of people to join us, too,” said K. Chokchai. The feast, held to mark the beginning of the high season, is expected to be repeated later in the year when more tourists can be invited.