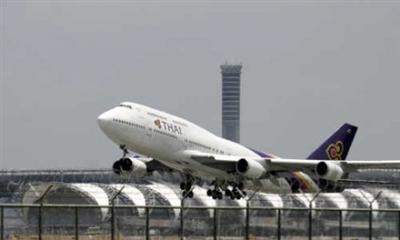 Suvarnabhumi Airport Director Niran Theeranatsin said that before the protests 16 international and domestic carriers had requested an additional 558 flights from April 9 to 18, an average of 56 per day, to cope with increased holiday season demand.

The carrier with the biggest increase was China Eastern Airlines, with requests for 186 additional flights, followed by Bangkok Airways (89) and China Southern Airlines (82).
However, the political situation has resulted in airlines canceling 88 of these flights by April 11, including many from China.

International passenger traffic at the airport on Sunday, the day after protests in the capital turned deadly, was down 10.1% compared to April 11 last year, he said.

However, both the numbers of flights and passengers to Phuket have ‘increased dramatically‘ for the period, indicating that many tourists were opting to avoid Bangkok and fly directly to other parts of Thailand, he said.

Exact figures were not reported.

Somchai Thean-Anant, director of national air traffic controller Aerothai, said that for the first half of fiscal 2010 there was a 12.2% year-on-year increase in the number of flights in Thailand.

He attributed this to signs of recovery in the global economy, government efforts to promote tourism, and increased availability of flights.