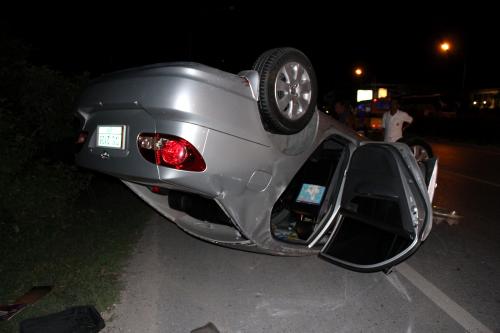 PHUKET: A pregnant buffalo that wandered onto the bypass road late Saturday night withstood the blows of three cars before dying in the median strip.

Kusoldharm rescue workers were called to the bypass road in front of Porntip Sea Store at 1am yesterday to aid the injured motorists.

The first vehicle to strike the buffalo was a taxi carrying passengers from the airport, a witness told Kusoldharm Foundation rescue workers. It sustained front-end damage, but no one in the car was hurt.

“The second car hit the buffalo and flipped over, and the injured driver was rushed to Bangkok Hospital Phuket,” the rescue worker said.

The last car approaching the scene wasn’t able to brake in time and also hit the buffalo. That driver was injured and taken to Phuket International Hospital, he said.

Nobody has claimed ownership of the buffalo or taken responsibility for its actions, said the rescue worker.