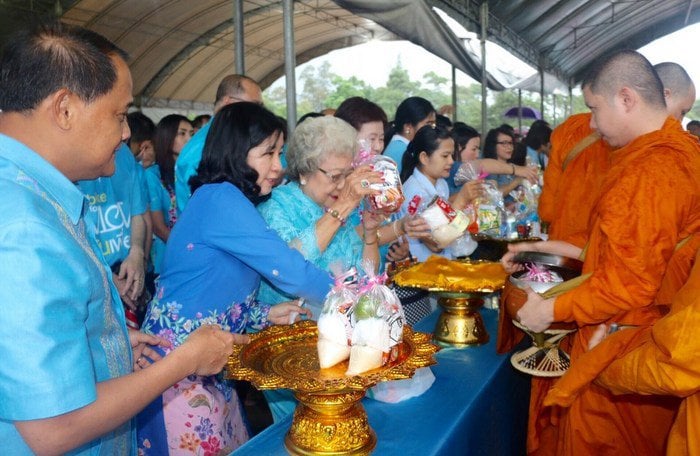 PHUKET: Celebrations of the auspicious occasion of Her Majesty Queen Sirikit’s 83rd birthday, which is also National Mother’s Day, began early this morning.

At 7:10am, Phuket Governor Nisit Jansomwong led the island’s top officials in offering alms to 84 monks at Sanam Chai (Chai Field) near Provincial Hall. Those attending the special occasion dressed in blue in honor of HM Queen Sirikit.

After the alms-giving ceremony, Governor Nisit, his wife Nutsaree, and other officials attended a ceremony at Phuket Rajabhat University, where they joined well-wishers in signing a congratulatory book for Her Majesty the Queen.

Then, at 7:10pm tonight, Governor Nisit will lead a homage-paying ceremony at Sanam Chai, which will include the lighting of candles and singing of the Royal Anthem in honor of Her Majesty the Queen.

Meanwhile, blood donors will get a t-shirt emblazoned with ‘Blood for Mom’ for their donation at the Phuket Regional Blood Center (PRBC) from 8:30am to 4:30pm today. A total of 400 t-shirts will be given away in honor of HM Queen Sirikit’s 83rd birthday.