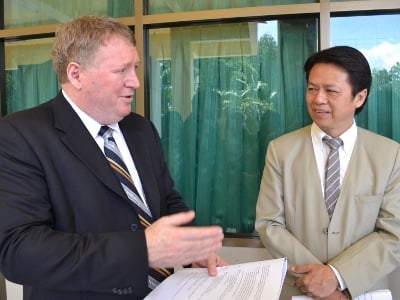 PHUKET: An official from the Australian Embassy in Bangkok joined pupils at a Phuket Town school today for a teleconference with high-school students in Australia.

Simon Farbenbloom, deputy head of mission at the Australian Embassy of Thailand, explained that the call was made to discuss an ongoing environmental sustainability project between the Srinagarindra, The Princess Mother School Phuket (SWPK, or “Chalermprakiat School“), in Saphan Hin, and Billanook College in Melbourne, Australia.

The two schools signed a Memorandum of Understanding in July of this year, allowing their pupils to exchange ideas about environmental issues.

“The video conference is about a project that both schools are involved in through the Australian Sustainable Schools Initiative Framework [AuSSI] and Center for Education and Research in Environmental Strategies [CERES].

“I think the focus at the moment in this school is on the sustainability of water and waste management,” said Mr Fardenbloom.

“The most important thing is the very positive interaction between students. The meeting with teleconference was chaired by students of both schools. This is not about the adults,” he added.

Links between the two schools have been developing for some time, and SWPK Director Nachai Keimnipatt announced that they were planning to return the many visits Australian officials and others have paid to their grounds.

“Around April, some members of the school board will visit Billanook College. We have received so many visitors, including officials of Australian Embassy. So, we would like to visit them there [in Australia] in return,” he said

Dr Prasit Koysiripong, chairman the board at SWPK, said, “We are also looking forward to a two-week student exchange program after that. So, Billanook students can spend time in Phuket to learn about the culture and environment, which our students can also do in their country.”

He added that he hoped the relationship will continue to grow and hopefully influence the same kind of activities throughout Thailand.

“We think around 20,000 to 25,000 students every year go to study in Australia. So, links are already good, but it is always good to keep them going. [Activities between] Younger children, and finding good ways to work together, and the environment, is a good way,” he said.