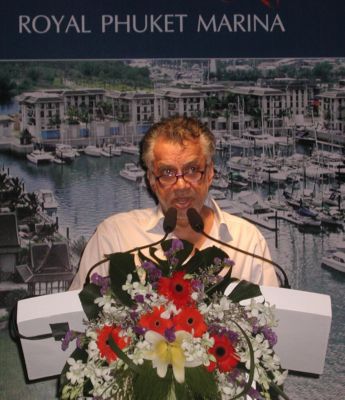 KOH KAEW: Royal Phuket Marina (RPM) developer Gulu Lalvani yesterday held a press conference to outline his vision to develop Phuket as the world’s top yachting destination – including his plan to build Zoran Island, a new island off the coast to site a deluxe marina complex capable of berthing mega-yachts.

“As many of you know, Bill Gates was here last month for two weeks on his 54-meter yacht. He said it was one of the best holidays he ever had. My dream is to have more people like Bill Gates coming here. All we lack is the facilities for yachts in the 40- to 70-meter range. My dream has been to make an island which can take mega-yachts. I shared my vision with [former] Governor Udomsak [Uswarangkura] last year and he like the idea very much,” he said.

Zoran Island, named after one of telecom tycoon Mr Lalvani’s sons, would be located about three kilometers offshore near the end of the existing channel to RPM. It would have restaurants, shopping and other facilities catering to the needs of the world’s super-rich, he said.

Mr Lalvani said that reports in the Thai media that Bill Gates would invest in the Zoran Island project were incorrect.

“I want to put the record straight on that it will be my investment, not that of Bill Gates,” he said.

Asked what he expected to be the biggest obstacle to turning Zoran Island from a dream into a reality, Mr Lalvani told the Gazette that he met with officials from the Marine Department earlier in the day and that he had hired an Australian consulting firm to conduct an initial survey of the proposed project site.

“The government is pro-tourism, but of course they have to check out that this is the right location…There don’t seem to be any obstacles, but we will have to go through proper procedures,” he said.

“The islands that surround Phuket are the most beautiful in the world. I am so confident that I have fully funded this entire project with my own money…there is not one baht of borrowing. So I have total confidence in Zoran Island being a long-term success.”

As had Mr Lalvani, K. Juthaporn hailed Phuket’s for being named as “Asia’s Maritime Capital” and the Phuket King’s Cup Regatta being named “Yachting Event of the Year” at the Christofle Asia Boating Awards in Bangkok last month.

Evidence of Phuket’s post-tsunami recovery and continued growth was reflected in tourist arrival figures, she said.

Also increasing were the number or direct flights to Phuket, including scheduled flights from places such as Australia and Hong Kong.

An increase in the number of charter flights scheduled to arrive from Europe in upcoming months reflects the fact that Europeans are beginning to view Phuket as more of a year-round destination than just a winter getaway, she said.

More good news comes with an increase in the number of cruise ships scheduled to include the island on their itineraries.

Among the newcomers are Seabourn and Carnival cruise lines, she said.

Further details of Zoran Island’s construction and projected costs have not been announced, but based on computer models released by Mr Lalvani, it appears that the island will be capable of mooring at least 40 yachts and about 10 mega-yachts. The design calls for a ring of villas surrounding a hotel and man-made bay.