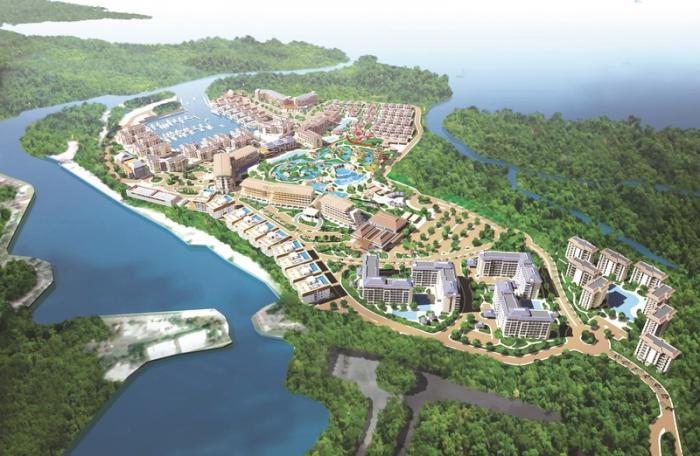 PHUKET: The Royal Phuket Marina (RPM) is on the market.

The announcement of the ‘luxury lifestyle development’s impending sale comes as a surprise to many industry analysts, particularly as RPM Chairman Gulu Lalvani has often referred to the development as his legacy. Just last year, Mr Lalvani announced a 5 billion baht investment plan for the marina.

In an exclusive interview with the Phuket Gazette earlier this week, Mr Lalvani explained he was approached by a private equity investor at the beginning of January.

Taking a break from his high finance life in New York to enjoy a yachting vacation around the Andaman, the holiday-maker reportedly contacted Mr Lalvani to make him an offer.

“I said, ‘it’s not for sale’. I told him this is my personal hobby and so on,” Mr Lalvani said.

While Mr Lalvani refused to reveal the identity of the potential buyer, he said that his own research into the man and his company found considerable investments in the hospitality industry worldwide.

Mr Lalvani’s anonymous investor reportedly holds significant assets in mixed-use developments in the US, including in Florida’s entertainment capital Orlando, and similar developments in California.

“He kept following up and I kept telling him no,” Mr Lalvani said. “Then he sent two people from the US and appointed an architect, saying he would pay for the architect to put together a master-plan of what he wanted to do here.”

Beyond the opportunity to get a free master-plan from a major property investor, Mr Lalvani said he was impressed by the investor’s willingness to do whatever it took to convince him to take the deal.

“He said he would pay for the master-plan, ‘You have nothing to lose and if we can’t do a deal you can have it with pleasure,'” Mr Lalvani said. “Well, that sounded very good to me. By the middle of March, he had convinced me that he was very serious and the master-plan went ahead.”

RPM, located on the island’s east coast, has appointed JLL Hotels & Hospitality Group to handle the sale through an ‘expression of interest’ campaign.

The plan is reminiscent of Mr Lalvani’s original vision for the marina complex, but with a significant difference in the market focus.

In 2002, Mr Lalvani was among a number of interested parties encouraging the Thai government to adjust its restrictive taxing structure that bulked foreign yachts with foreign carpets and levied a punitive 200 per cent plus tax on their import. With the changes in the excise and tax laws, the flow of new yachts arriving in Phuket’s waters jumped considerably and Mr Lalvani began building RPM.

The development was to take place over multiple phases, including a second marina basin, high-end condos and luxury villas. What exists as RPM today is just the first phase of that original plan.

The collapse in tourist arrivals following the 2004 tsunami and a series of international economic crises stalled development of further phases. It was not until just over a year ago, Mr Lalvani said, that he felt confident enough to announce his intention to bring in new investment to kick start further phase development.

However, in the years since the completion of the first phase of the marina, the demographic of visitors to the island has changed dramatically.

“I didn’t expect this demographic,” Mr Lalvani said. “I thought there would be more and more Europeans.” Mr Lalvani said his original vision for RPM was that it would be the cornerstone of a re-imagined Phuket that would become the ‘Monte Carlo of Asia.’

“I did genuinely think like that,” he said. “I discounted the Chinese economy progressing so fast. So there I was wrong. What is happening now is Europeans are still coming, but Asians are coming in greater numbers.”

Mr Lalvani experienced first hand the shift in tourism demographics, as an estimated 30,000 Asian tourists now use the marina each month as a jump off point for speedboat tours to Phang Nga Bay and Phi Phi. Good business, but definitely not the business he was expecting.

According to JLL’s ‘Information Memorandum’ on the RPM offering, which the company distributed to about 100 of its top property clients around the globe, 63 cities in 20 countries now have direct flights to Phuket. Nearly half of those flights originate from China.

“40 per cent of the world’s population lives within five hours of Phuket,” Mr Lalvani says. “It was direct flights that made the Chinese market. India will be next, if they get direct flights. Once they get going… This place hasn’t seen anything yet. The future of Phuket for tourism is incredible.”

The new investor’s master-plan focuses on the mid-range family market. The change in demographic emphasis will also bring the development in line with the Tourism Authority of Thailand’s latest shift in marketing position, from a value-for-money destination to a value-for-experience destination, purportedly driving tourist spend through longer stays and higher quality experiences.

JLL has set a ten-week window on the expression of interest, with an expectation of serious offers to be on the table before the end of September. But with an eager investor already on the hook, why did Mr Lalvani appoint JLL in the first place?

“We couldn’t agree a price. Obviously someone coming in wants to have the lowest [price], but the seller wants the highest – and I wasn’t wanting to sell it anyway,” Mr Lalvani said. “So, he came up with this idea: ‘Why don’t you put it on the market? I have to have the first refusal on the top bid. If I match it, I get it. If I don’t match it, go ahead.’ So, that’s the legal agreement that we signed.”

At this stage, however, Mr Lalvani has not yet made any commitment to sell RPM and says he would still be happy to continue to build his legacy in the years ahead. But the crux of the issue is, who will carry that legacy into the future?

“To be frank with you, my children, unfortunately, are not turned on by living in Phuket,” he said. “My son has a very successful business and is jet-setting around the world, my daughter is married in England and doesn’t want to move from there and Zoran [his youngest], I was hoping, would take over here, but he’s told me: ‘Don’t count on me, I want to live in Europe.’ That’s a bit of a disappointment.”

“For me [the offer] is timely. I’m 77. I don’t feel it but I see the potential. There are more boats here than ever before. And if there’s the best water park here, surrounded by all categories of hotel for whatever your budget, and the best marina and the best beach club, where else can you go?” Mr Lalvani asked.

“People go where their kids can be happy.”

19-year-old arrested for more than 20 robberies