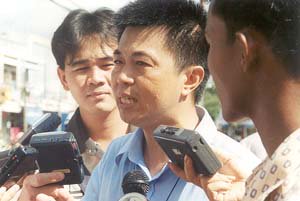 PHUKET TOWN: Some 300 Phuket tour guides gathered at the Lan Nawamin square on Phuket Rd this morning to protest Cabinet’s resolution last Tuesday to allow tour agencies that bring in more than 5,000 tourists in the preceding year to hire 10 foreign workers. The resolution also stated that Cabinet would consider reducing the threshhold to 1,000 tourists a year. The protest was led by Supachai Wattanaparinton, Vice-President of the Phuket Professional Guide Association (PGA). K. Supachai said that the Phuket PGA had started a petition to collect 50,000 signatures of Phuket residents who object to the Cabinet resolution, which was intended to “make tourism businesses run smoothly and fluently”. “The President of the Phuket PGA, Panomphol Thummachartniyom, and the Presidents of the Chiang Mai PGA and the Songkhla PGA will meet with Prime Minister Thaksin Shinawatra today to petition him to reconsider the August 19 resolution,” he said. The mob marched on to Phuket Provincial Hall, on Narisorn Rd, to voice their objection to Governor CEO Pongpayome Vasaputi, and to bring to his attention problems of illegal foreign tour guides. K. Supachai said that the hiring of foreign guides as interpreters or translators was reducing job opportunities for Thais. After speaking with K. Supachai, Governor Pongpayome said, “I was unaware of the Cabinet’s resolution. I will raise this issue with PM Thaksin.” On the topic of illegal tour guides, Gov Pongpayome said, “[Until today] I had not heard any complaints from Thai tour guides about illegal tour guides, but I told them that if they had any problems they could complain to me. “My understanding is that foreign guides must only work together with Thai guides.” The Nation reported on Friday that Tourism and Sports Minister Sonthaya Kunplome told tour guides in Bangkok, who were threatening to protest the resolution, that foreigners would not be allowed to work as guides. “Tour operators can hire some foreign staff,” he said. “However, foreign workers are not allowed to work as guides in Thailand.” He also said the PGA did not fully understand the Cabinet’s approval of the recruitment of foreigners. K. Sonthaya said the government would set up a taskforce to assess the impact of the employment of foreigners by Thai tour operators.