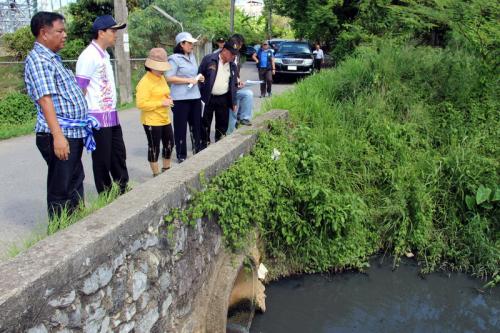 PHUKET: After inspecting the site in Rassada where highly polluted wastewater is pumped directly into the Bang Yai Canal in Phuket Town (story here), Phuket Governor Maitri Inthusut has drawn up a plan to solve the problem.

Before drawing up his plan, Gov Maitri broadened his scope of appraisal and inspected drainage ditches behind the Radio of Thailand official residences near Phuket Rajabhat University.

“We found water in the area released by local residents. It was dirty and smelly and pumped directly into the Bang Yai Canal,” he said.

The Governor’s two-step solution starts with dredging the drainage ditches and lining them with cement.

“We also need to oxygenate the water by aerating it – to create the right environment for the microorganisms in the water that consume bacteria and help to clean the water,” he said.

“To deal with the bad smell, we will put EM balls [Effective Microorganism balls] and EM water into the ditches,” he said.

In addition, to alleviate flooding problems, Rassada Municipality will increase the size of their sewer pipes from 1.2 to 1.5 meters to improve water flow, the Governor said.

The second phase of the project is a campaign to convince the restaurants, companies and residents in the area to install their own wastewater treatment tanks to help reduce the average biological oxygen demand (BOD) in the water, he said.

The BOD, a key indicator of water quality, was recently measured at 54 in the Bang Yai Canal; the standard average is about 34.

“Officials will check up on wastewater treatment at factories, housing estates and other sites in the area in order to help solve this environmental issue,” he added.

“Everyone must work together to solve the problem here,” he concluded.