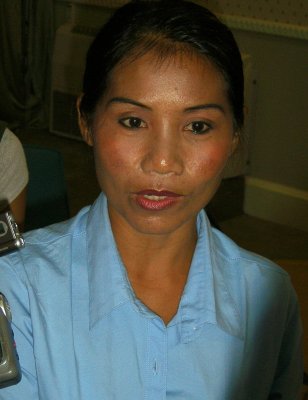 PHUKET: Governor Udomsak Uswarangkura has assigned a team to help Sascha and Patchara “Riem” Meissmer investigate the identity and whereabouts of the Eurasian-looking girl in a photograph posted on the Internet.

The Meissmers believe the girl in the picture may be their daughter, Solitaire, who was identified as having died in last year’s tsunami.

The Governor told a news conference this morning, “The girl in the photo does resemble their daughter. We are not sure who she is, but I want to help the Meissmers find answers to their questions.

“The Royal Thai Police and Phuket Province will co-ordinate efforts to help them. With the local police we are now trying to investigate when and where the photo was taken, and what happened to the girl in the picture.”

Gov Udomsak said that foreign children who had been separated from their relatives by the tsunami were taken to the Phuket Provincial Administration Organization (OrBorJor) center where their details were noted before they were flown to Thammasat University in Bangkok.

He said he believes the photograph was taken by OrBorJor staff or medical staff who were at the OrBorJor treating tsunami victims.

“We need to gather information on the children processed at the OrBorJor on December 27 and 28. We will check the list of passengers [evacuated by air] with the Phuket Provincial Immigration Office and the Thammasat center on relevant dates to see if there were girls of [Solitaire’s] age on one of those flights. If there were, the next step will be to find out where they are now.

“I do not think there has been a mistake in the DNA matching process, as a number of different experts agreed that the match [of a body identified as being Solitaire, which was later cremated] was 99.99%. Nonetheless, the Thai Tsunami Victim Identification (TTVI) unit will set up a team to re-examine the case.”

TTVI Joint Chief of Staff Pol Col Pornprasert Kanjanarin said, “To reassure the family, we will look into the case again. However, we have full confidence in our [DNA matching] process.”

Asked whether the original DNA match might have been from a family other than the Meissmers, he responded, “Not just in this [victim’s] case, but in all cases, we have what is called a ‘chain of custody’ at every point in the process and we have documented everything. We know what samples were sent to the lab when and by whom, so we have confidence in the results.

“We can take a DNA sample again [from the Meissmers] but not from the victim’s body, which has already been cremated.”

Mr Meissmer commented, “I am pleased that the Governor and the TTVI are willing to look into the matter; 99.99% is still not 100%, and I can’t help wondering if there may have been a DNA mix-up of some kind.”

His wife said, “On December 26, I held onto Solitaire as tightly as I could, but the second wave ripped her out of my arms. A friend later told me he saw my daughter being rescued. I have long sensed that my daughter is still alive somewhere, and when I saw the picture [on the Internet], I felt more sure. We may yet find her.”