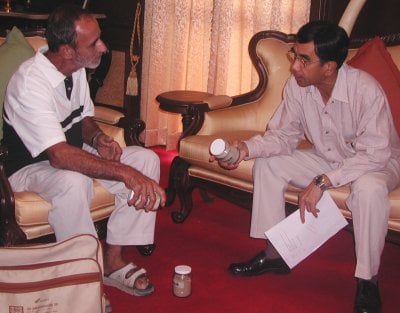 PHUKET: Governor Udomsak Uswarangkura has given approval in principle for Australian resident Stafford Steer to buy sand from Nai Harn Beach and spread it on a beach volleyball court he plans to open soon.

At a meeting with the Governor yesterday, Mr Steer explained that he will require some 20 truckloads of sand to cover the 360-square-meter court off Soi Suksan 2, Viset Rd, Rawai.

During the meeting, Mr Steer produced several jars containing samples of sand from different beaches, to demonstrate why the sand at Nai Harn was best-suited to his project.

The court is part of a plan Mr Steer has for a four-rai youth training and sports center, which is also to feature a tennis court and an archery field.

Gov Udomsak said, “I support this project. It is in accordance with government policy to mitigate social problems by engaging young people in activities such as these.

“True, it is a private project – but it will be of benefit to the public. We will therefore grant the go-ahead for the sale of sand at a special price.”

He added that he had requested Mr Steer to submit his proposals in detail before final permission is granted.