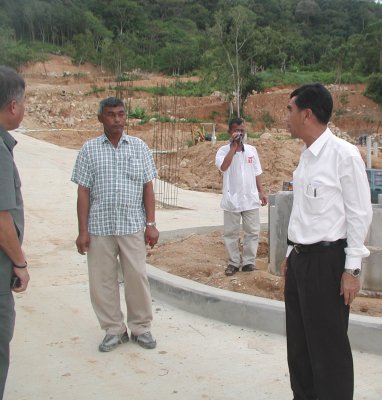 Gov Udomsak said his inspection of the site followed complaints by Soi Siang Tai residents, lodged with the Damrongtham Center, which serves as the provincial ombudsman’s office.

The complaints alleged that inadequate safeguards had caused flash-flooding and mudslides to the densely-settled area below the project during the heavy rains of September 18 and 19. (See earlier story here.)

The mudslide passed though the homes of some residents, and floodwater blocked one of the two inbound lanes on Thepkrasattri Rd, onto which the narrow soi empties.

“A subsequent inspection found the project in violation of seven building codes aimed at environmental protection,” the Governor informed a project engineer, who agreed to halt work without argument.

The violations found were:

– Failure to carry out piling work;

– Failure to construct a barrier wall to prevent mudslides;

– Failure to include a sediment collection pool for surface runoff;

– Failure to place metal plates over the gap at the project entrance to divert runoff away from the soi below.

The Governor added that the project had never been approved by the Rassada Tambon Administration Organization.

Despite the damage caused, and the Governor’s own strong statements about cracking down on illegal developments, he said the project would be allowed to go ahead once the developer, Phuket Park Hill Co, assembles all the required paperwork.

It was not clear whether the company would be required to compensate the mostly low-income residents of the area whose homes and property were damaged by the illegal construction.