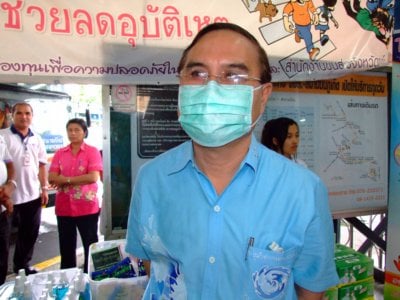 PHUKET CITY: In a sign that Thailand might be winning the war against swine flu, Thailand’s Ministry of Public Health (MoPH) today announced a lower number of daily new cases, 43, compared to earlier this week.

Disease Control Department Director Dr Somchai Chakrabhand believes the falloff in new cases, by almost half, is a sign that preventive measures in schools have been effective in containing the spread of the A(H1N1) virus that causes the disease.

However, health agencies will continue monitoring the situation closely, he said.

In its latest update on the swine flu pandemic, the World Health Organization announced on Friday that globally there were 44,287 cases with 180 deaths, with 4,667 new cases and 13 more deaths since the previous report issued two days before.

The global mortality rate for those infected with A(H1N1) remains below 0.5%.

There have still been no reported deaths from the disease in Thailand, which had 518 cases according to the WHO’s update on Friday.

In Phuket there have only been a handful of cases, mostly people who contracted the disease off the island.