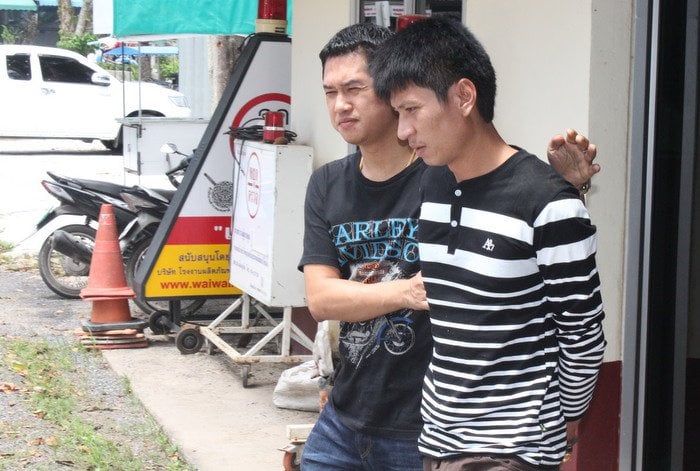 PHUKET: A Kalasin man who pawned a fake gold necklace after his friend successfully swindled the same shop a day earlier has been arrested while his accomplices remain at large.

Police received a call from Tongmaneemas gold shop, in Rassada, at about 11:45am yesterday reporting that someone had attempted to pawn a fake two-baht weight gold necklace with a genuine piece-value of about 38,200 baht.

The shop owner, who asked to remain anonymous, told police that when he and his employees checked the gold necklace, they were able to determine that it was fake.

The shop staff apprehended the suspect, keeping him in the shop until the police arrived.

“We questioned the suspect – 29-year-old Sarawut Juksan – and he told us that he and five friends had checked into the Pimpraprai Place hotel on Tuesday June 30 and were to check out on Thursday July 2,” said Lt Surasak Pipitkul of the Phuket City Police.

“Mr Sarawut told us that one of his friends dropped him off at the shop to pawn the necklace. The friend then rode off to wait for him in the room. He was told to return on his own.”

Police took Mr Sarawut to the rented hotel room. However, his accomplices had checked out before their arrival.

Mr Sarawut confessed that an accomplice given the pseudonym ‘Korn’ had pawned another gold necklace at the same shop on Wednesday, receiving 30,000 baht cash which was then split among the six of them, explained Lt Surasak.

The gold shop owner explained that when he checked the first fake necklace, he had only focused on the joints, which were real gold.

“I kept the fake gold necklace pawned on Wednesday as evidence because I had initially only checked the joints, which were real gold. However, a thorough check later revealed that the rest was fake,” he said.

“As both gold necklaces are the same type I realized that they came from the same gang of thieves.”

Officers have identified the vehicle the gang is using and expect to make arrests soon.

Mr Sarawut was charged for attempted fraud, with pending charges of gang fraud once the other suspects are arrested, confirmed Lt Surasak.