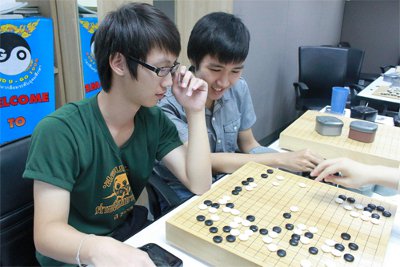 The foursome join the boy’s doubles team of Krit Jamkhajonkiet and Panode Kingtkaew as so far the only Phuket competitors to win gold at the games, dubbed “Phuket Games 2012”.

Youngsters Krit and Panode won gold in the strategy game Go, the tourney of which is underway at the Chalermprakiet School at Saphan Hin.

Phuket’s only medal in track and field has gone to Siriyakon Kamlai, who won bronze in the grueling 3,000m event yesterday, crossing the finish line at Surakul Stadium with an impressive time of 11:15.

In the latest national tally, Bangkok has collected the most gold medals, 19, followed by Chonburi (16) and Suphanburi (11). Places are determined Olympic-style on the number of golds, not the total medal haul.

As the Phuket Games enter their seventh day of competition today, more medals are up for grabs in 11 different games and sports.

One of today’s many highlights will be at Surakul Stadium in Phuket Town, where Thailand’s best young track and field athletes will compete for medals in the following events:

In an exciting 10,000m final this morning, brothers Nattawut In-num and and Nattawat In-num of Chonburi dominated the field, taking gold and silver with times of 34:59.37 and 34:59.70, respectively.

The pair are students at the Chonburi Sports College, which has been racking up an impressive number of medals at the games. Thawatchai Hokpanna of Roi-et province finished third, crossing the finish line two minutes later with a time of 36:33.20.

Those who cannot make it to the sporting venues around the island to enjoy the competitons first-hand can watch the televised action on free-to-air NBT Channel 11 this afternoon.