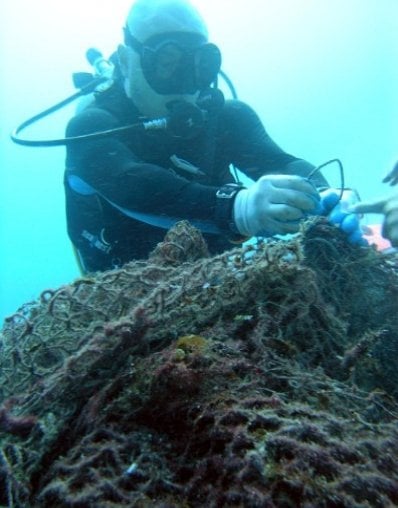 PHUKET: Go Eco Phuket, the local marine conservation group launched last weekend with the world’s biggest reef cleanup, is looking to maintain its momentum by joining the Royal Thai Navy in scuttling a ship to use as an artificial reef.

Group members have already held discussions with local Naval officers about the project, which is expected to ease the pressure on several dive sites in the proposed area.

Go Eco Phuket’s inaugural event last weekend surpassed the group’s expectations, as 502 participants stepped onto Chalong Pier and registered to get on a boat to help project “Dive Against Debris”.

Of those participants, 370 were divers; the rest helped as snorkelers or debris sorters, or took part in beach cleanups.

Not included in the group’s total number of participants were the more than 100 government volunteers, ranging from Royal Thai Navy personnel who provided assistance to divers, to the local administration organization workers who helped unload the debris at Chalong Pier to ensure that it was transferred to a landfill and did not find its way back into the sea.

“This is amazing. It’s kind of unprecedented. Not only the number of divers you have taking part, but you have the Thai government, you have the TAT [Tourism Authority of Thailand], the Royal Thai Navy… you have everybody rallying behind it, which is outstanding,” said Henrik Nimb, the Vice President of PADI Asia Pacific and Director of the Project AWARE Foundation.

“One thing we can all agree on is that we have to save the reefs. We don’t want to see this as one event, but [would like to see] the dive centers continue with it and keep the momentum,” he said.

Though grateful for the “PADI power” that helped unite the island’s competing PADI dive centers to achieve the record-breaking cleanup, many members of the Go Eco Phuket group hope to include all dive centers on the island, regardless of affiliation, in future events to ensure the reefs of Phuket and surrounding islands remain pristine, world-class diving attractions.

“Go Eco Phuket isn’t all about PADI… I am working very hard for Go Eco Phuket… I would like to have all the dive centers be part of Go Eco Phuket; it doesn’t matter what organization they are from; I need every dive center to unite and work with the local government,” said Narong Chaimo, who acted as liaison between Thai officials and the Go Eco Phuket group for the event.

Kerry Leach, one of the event organizers, echoed Mr Narong’s desire to incorporate all dive companies on the island in the Go Eco Phuket group.

The cooperation and coordination of the day’s event was highlighted by the lifting of a 4.5 ton fishing net from Banana Bay on Koh Racha Noi.

Divers spent three dives carefully removing the netting from the coral reef and attaching lift bags before the Royal Thai Navy and a local fishing vessel were able to get the net out of the water.

The crane attached to the fishing boat was bent in the five-hour attempt to lift the net, explained Ms Leach. Unwilling to dump the huge net back into the ocean, the Royal Thai Navy directed the fishing vessel toward the RTN’s Wang Nai 774, which lowered its beach landing ramp into the water.

“One of the head Royal Navy officers on the boat with us wai’d the fishermen who had helped,” said Ms Leach, when asked about some of the most memorable moments of the event.

“We really need to thank the Royal Thai Navy; without them we would have never lifted the 4.5 ton net out of the water,” said Mr Narong.