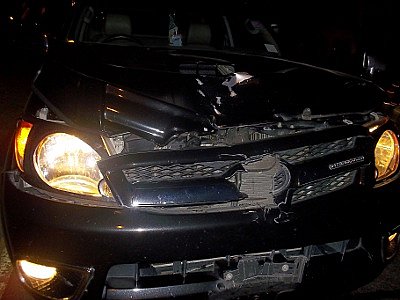 PHUKET: A 16-year-old Burmese girl was struck dead by a pickup truck while crossing Thepkrasattri Road, the main road to Phuket Airport, in Thalang last night.

Rescue workers from the Kusoldharm Foundation arrived at the scene to find that her father, a 38-year-old Burmese laborer named only as “Mr Chart”, had sustained only minor injuries.

Dao’s body, however, had been sent flying onto the median strip.

The force of the impact left the front of the pickup, which was loaded with three large ice boxes, with a dented hood and crushed grille.

Dao lived with her father at the labor camp behind the furniture store.

“The father and the girl walked across the street together to go to a grocery store opposite the camp. All of a sudden, the truck came at high speed and hit the girl,” said a local villager who witnessed the accident.

Thalang Police consider Dao’s death to be the result of a genuine accident.

The driver did not flee the scene.

“The man was not drunk. He waited until police officers arrived and explained himself to me,” said Lt Col Somkid Khaosang of Thalang Police.

“I didn’t smell any alcohol on his breath and he didn’t behave like he was drunk. So I questioned him, wrote down details of the accident in the police log, and let him go,” Lt Col Somkid said.

The scene of the accident last night was only a few hundred meters from the point at which a car spun out of control at high speed and slammed into a power pole on November 27, killing two passengers in the vehicle.