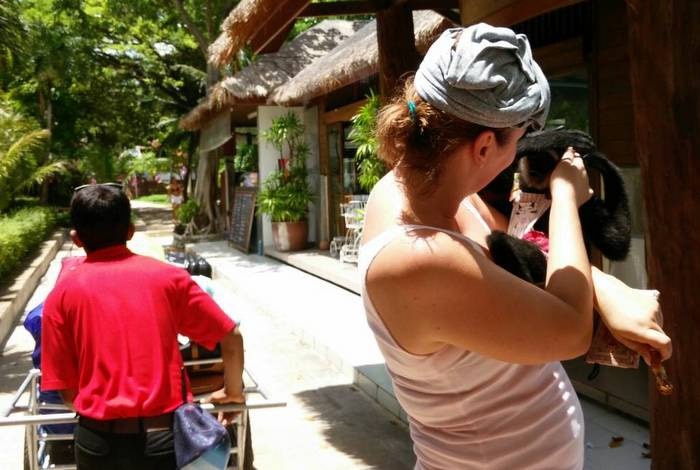 PHUKET: Dressed up gibbons were spotted being touted day and night on Phi Phi island last weekend. However, police and national park officers insisted to the Phuket Gazette that they were unaware that the practice of charging tourists to take pictures with the protected species was continuing in the small party town of Ton Sai.

The situation was brought to officials attention after the Gazette passed on a reader’s photos to local officers.

“We have done our best to take care of this issue. Within the last three months, we have made arrests in two cases that involved the illegal ownership and abuse of protected species, such as slow lorises and gibbons,” Phi Phi National Park Assistant Manager Boonname Chauyradom told the Gazette today.

“We appreciate the concerned person supplying us with the photos, as we can now locate where the animal touts are conducting their business.”

The photos presented to officers show touts showcasing the protected species to Russian and Chinese visitors along the boardwalk, about 200 meters from the police station, but out of direct sight of officers. Though no photographic evidence supported the claim, the Phi Phi tourist, who declined to be named, also said that he had seen the touts working at night in the heart of the ‘backpacker bar’ area.

Phi Phi Island Police vowed to follow up on the tourist’s concerns.

“It has been quiet for a while since our last arrests. It appears that these touts have managed to hide from us,” Lt Col Danai Niyomdecha of Phi Phi Island Police said. “However, we will check the location pictured in the photograph and start hunting down the gibbon and the tout.”

In March, former Miss Universe Natalie Glebova caused a social media storm after she posted a photograph on Instagram of her posing with a gibbon in Ton Sai (story here). She later led a public awareness campaign to educate people about the issues of touts’ illegal ownership of protected species (story here).