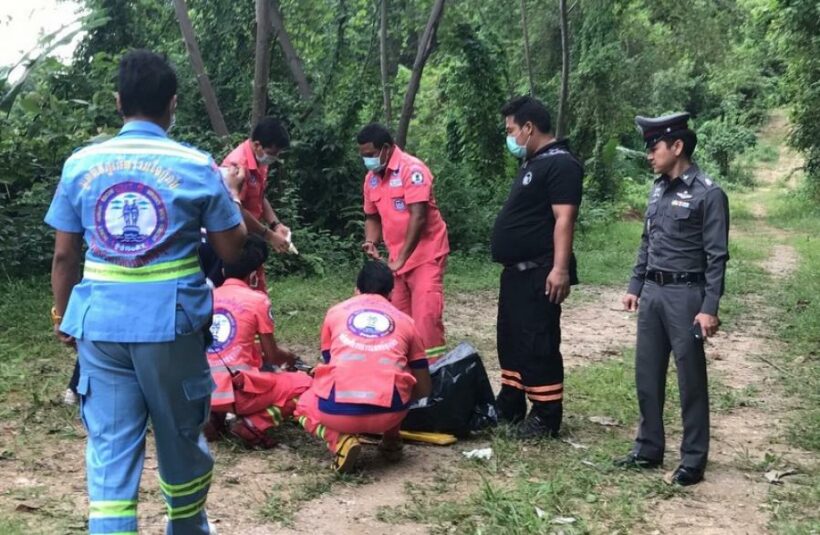 PHUKET: The body of a missing woman was found in a forest in Kathu yesterday afternoon, shortly before her boyfriend, a suspect in the case, slit his throat when approached by police officers for questioning.

The victim, Picha Nampadung, 35, was reported missing by her niece, Rujirada Ornkorat, on July 1 (story here).

“Ms Picha’s relatives told us that she was dating a German man named Nico Deutsch. They had been together for about five months. Her neighbors also told us that the pair were heard arguing loudly on the night of June 30,” said Col Akanit Danpitaksat of Phuket Provincial Police.

Police wanted to bring her boyfriend in for questioning, but were initially unable to locate him.

“We investigated further and followed the GPS of his rental car, which led us to the forest located on the road from Chao Fah West to Prince of Songkla University. There we found the body wrapped in a blanket and tied together with sticky tape,” said Col Akanit.

Due to distortion of her facial features from decay, it wasn’t immediately clear if it was indeed Ms Picha, but the tattoos on her body led her family to believe that it was her.

This was later confirmed by a medical examination at Vachira Phuket Hospital. The exact cause of death will not be known until the examination is complete.

“Ms Rujirada said that she had called her aunt on June 30, but Mr Nico had answered and said that she was sick and had fallen asleep after taking medication. The next day, she called again and was told that Ms Picha had gone back to her hometown. After that, no one was able to contact either of them,” said Col Akanit.

“We set up a team to find Mr Nico. We finally found him on Saiyuan Soi 8 in Rawai. As soon as he saw us approaching, he took out a box cutter and slit his throat,” he added.

Mr Nico was rushed to Vachira Phuket Hospital by police and rescue workers.

“He is still undergoing treatment in the Intensive Care Unit. We are monitoring him closely and waiting for him to recover so we can question him,” said Col Akanit.