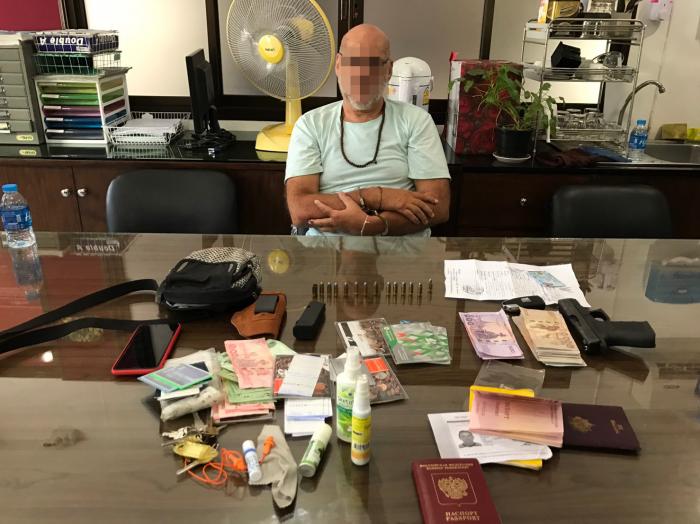 PHUKET: Two Russian tourists and a French expat were arrested after they were seen armed and fighting in Patong this afternoon.

The incident happened near a bike rental shop run by the Frenchman, named by police as Gerard Pecherstorfer, 63, and his wife Suvan Paiwansao, on Sirirat Road.

Ms Suvan told police that the argument was about a bike rental agreement between them and the tourists.

“Antonov Sergey, 40, and his friend had been renting a bike from Mr Pecherstorfer’s shop since January 19. He came back twice to renew the contract, once on January 26 and then again this afternoon,” said Phuket Provincial Police Deputy Commander Peerayuth Karajedee.

“Ms Suvan told Mr Sergey that his passport had expired and asked him to provide a copy of the new one. He said he would have to go back to the hotel to get it, and asked his friend to wait at the shop. However, soon after Mr Sergey left, his friend took off as well.”

Ms Suvan related the incident to her husband when he returned from the bank, so he went off in search of the customers.

“When he found them, the three of them got into an argument, which soon escalated into a physical confrontation. Mr Pecherstorfer threatened the others with a gun, which he then took out and shot in the air twice,” said Col Peerayuth.

“Mr Sergey managed to grab hold of the gun and threw it away. Passersby intervened to stop the fight and called the police,” he added.

All three men were taken to Patong Police Station, along with the gun and other evidence.

The gun is registered under Ms Suvan’s name, but Mr Pecherstorfer told police that he carried it to protect himself, as he made frequent trips to the bank with a large amount of cash on his person.

He was charged with illegal possession of a firearm and carrying a firearm in public without permission.

“We have not pressed charges against the tourists at this stage. We have to question them, search their room and collect further evidence first,” said Col Peerayuth.

“I will personally take care of this case, as we are coming down hard against crime in Phuket, especially with regard to the mafia and other powerful people,” he added.