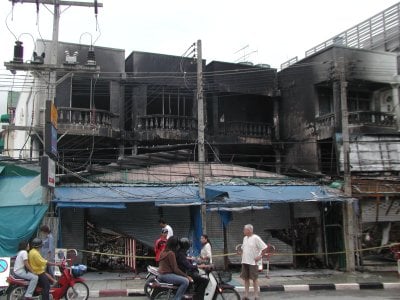 PATONG: Four shophouses on the corner of Thaweewong Rd and Soi Phermpong Phattana 2, just south of the Banthai Resort, were damaged by fire early yesterday morning. There were no casualties.

Patong Fire Chief Paitoon Pholrop told the Gazette that the blaze broke out about 2 am. “It took firefighters two hours to put out the fire. Luckily, no one was hurt,” he said.

He added that the fire spread quickly through the adjoining shophouses, which held small stalls and tailors’ shops.

Pol Lt Pratheung Pholmana told the Gazette, “We are waiting for the results of forensics tests to determine the cause of the fire.

“We don’t yet know how much damage was caused in financial terms as we’re still waiting to talk with some of the shophouse owners,” he said.

“There were people in the buildings when the fire broke out, but they all managed to escape,” he added.