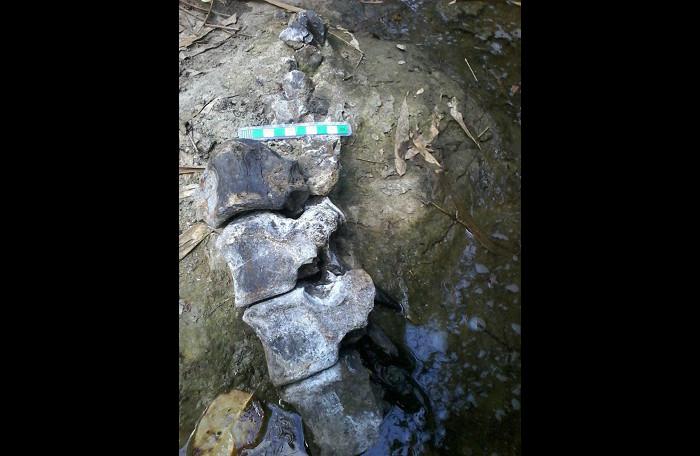 KRABI: Fossilized bones, possibly those of a dinosaur, have been discovered in a stream bed in Krabi.

Locals stumbled across the fossils half-buried in the bank of Khlong Paklao in Na Nuea, a sub-district Ao Luek District, after the water level in the stream dropped to about half a meter following an extended period of drought.

The petrified bones are thought to be vertebrae, jawbones and teeth from a creature or creatures that lived at least 30 million years ago, said a paleontologist from the Department of Mineral Resources (DMR) on May 10.

“They were found in sandstone dating back to the Carboniferous era,” she said.

The DMR has cordoned off the section of stream while samples are collected to be sent to Bangkok for further examination.

“We will try to find out the exact age of the fossils and learn more about what kind of creatures the bones belonged to. The bones are at least 30 million years old but could be as old as several hundred million years,” said Ms Chertchat.

More fossils have been found about a kilometer north of the site and we are hoping to make more interesting discoveries in the area,” said Ms Chertchat.

Na Nuea sub-district chief Suwit Promrat said locals have been finding fossils in the area for the past few years.

“These latest fossils were unearthed when a group of villagers went to dig the stream bed to make it deeper following severe drought, which has reduced the 60-meter-wide waterway to just a few meters,” said Mr Suwit.

The director of the Ministry of Tourism and Sports Krabi Office, Sirawee Waloh, said the latest fossil find, as well as the nearby Pee Hua Toe cave (Big-headed Ghost Cave) featuring prehistoric paintings on the walls, made the area one of significant historical significance.

“The area should be developed into a tourist and educational destination,” said Ms Sirawee.

Power cut to affect Koh Kaew on May 17