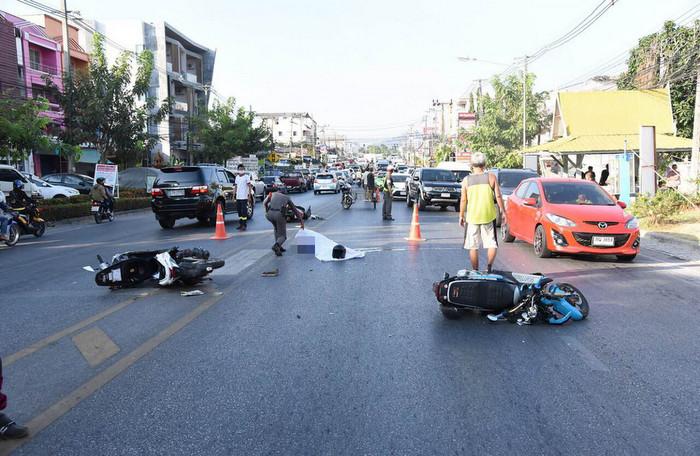 PHUKET: Police cleared a suspected hit-and-run driver of any involvement in the accident that killed one and injured two in Wichit on Monday morning (story here).

Witnesses told officers that a Toyota Fortuner of an unknown color was heading toward Phuket Town when it struck Narakorn Onthong, 30, and Pa Yasamut, 54, before crossing lanes and fatally injuring 17-year-old Sittichai Lakkoh.

The driver of the suspected Toyota Fortuner came forward to police later the same day to deny any involvement.

“The driver, who we have declined to name, came to us to have his vehicle inspected. I checked the Fortuner and found no scratches or dents that would indicate that he was involved in any accident,” confirmed Maj Narong Muangduang of Wichit Police.

The driver’s claim was later backed by the two surviving victims, as they both indicated that it was in fact Mr Sittichai that caused the accident when he lost control of his motorbike.

“The CCTV in front of the school was not working at the time of accident, so we are unable to prove what really happened. However, we took statements from Mr Narakorn and Ms Pa, which confirmed that no other vehicle was involved in the accident, thus clearing the driver of the Fortuner of any charges,” Maj Narong added.