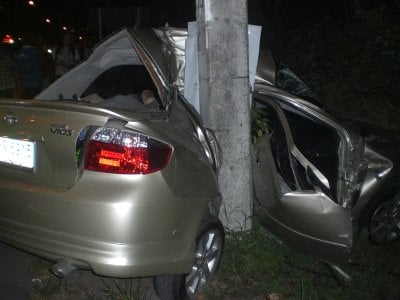 PHUKET: Two foreigners died this morning and two more suffered serious injuries after the Toyota Vios they were travelling in slammed into a roadside power pole in central Phuket.

A rescue worker at the scene told the Phuket Gazette that the accident happened at about 5am at the U-turn on Wichit Songkhram Road near Thai Naan Restaurant.

“One of the men – the driver – died after being taken to hospital. The woman sitting directly behind him died instantly,” he said.

The man is still recovering at Phuket International Hospital. The woman, initially rushed to to Bangkok Hospital Phuket, was transferred to Vachira Phuket Hospital about two hours ago.

The body of the woman who died is also now at Vachira Hospital, he added.

Staff at Vachira told the Gazette that they believe the two survivors and the female victim are Russian nationals, and that the driver was likely from Kuwait.

The Russian honorary consulate in Phuket has been unavailable for comment this afternoon.