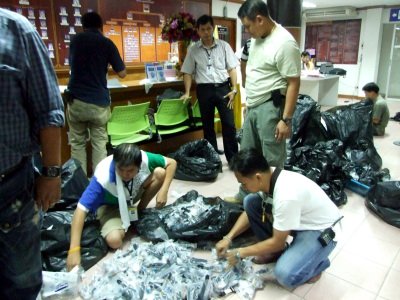 High-ranking provincial officers along with Patong Police Superintendent Arayapan Pukbuakhao led the search on a warehouse off Nanai Road in Patong.

The warehouse tenants named as Truong Van Doan, 33, and Tong Vankorn of Vietnam, were arrested at the scene, police said.

Police seized about 10,000 pirated watches in the raid with a street value of about five million baht.

Mr Truong told police that the watches were shipped, by a man he named as “Arping”, from China to Bangkok before being transferred to Phuket.

The Vietnamese pirate duo then allegedly distributed the goods to shop stalls in Patong, Karon, Kata, Kamala and other popular tourist places in Phuket.