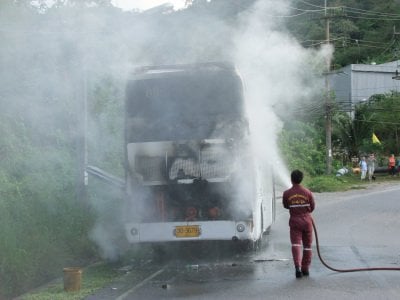 PHUKET: A group of Finnish tourists on a tour to Laem Phromthep had a sudden change of itinerary this morning when their Phuket tour bus burst into flames on a hilly stretch of road in Karon.

The incident occurred at about 8:30am near to the entrance to Centara Grand Beach Resort Phuket on Wiset Road, a curvy coastal road that connects the resort towns of Patong and Karon.

“The blaze started suddenly, with some smoke coming out of the bottom of the bus. It was spreading quickly when I stopped and shouted for all the passengers to get off as fast as possible,” said the bus driver, age 55.

“I tried to put out the fire using four extinguishers on the bus before the fire truck arrived,” he said.

The blaze was extinguished about 15 minutes later by a single fire truck from the Karon Municipality Department of Disaster Prevention and Mitigation.

At the time of the fire only four Finnish tourists, one guide and a translator were aboard. The vehicle was heading to pick up more tourists from different hotels in Karon, with the intention of taking them all to Laem Phromthep in Rawai for day trip.

An electrical fault may have caused the fire, the driver said.

The bus was owned by Apinan Loddam and rented out by Best Way Trip Co Ltd, which carries insurance for passengers as required by law, the tour operator said.