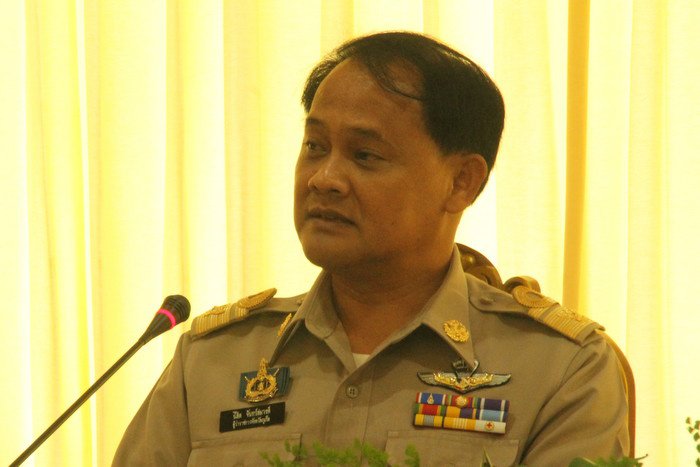 PHUKET: Governor Nisit Jansomwong announced yesterday that the final traces of the ubiquitous encroachment onto Phuket beaches that prompted the beach cleanup last year would be swept away as soon as possible.

The governor and other island officials. speaking at a press conference held at the Royal Thai Navy base in Cape Panwa, addressed the problem of several buildings still encroaching on two beaches at Cherng Talay.

Two restaurants – Beach Bar and Paul – are still standing on Lay Pang Beach, and vendors have started moving back onto the sand, Ma-ann Samran, president of the Cherng Talay Tambon Administration Organization (OrBorTor) explained to the press.

“We have filed complaints with the Cherng Talay Police about the two restaurants on the beach. It is in their hands now,” he said.

“We also fined every vendor who has tried to go back onto the beach 2,000 baht.”

“We will file a warning with the owners of Zazada Beach Club and the shops occupying the one-storey building within a week that will give them 30 days to move out,” explained Mr Ma-ann.

“After the 30 days, Zazada Beach Club will be torn down,” he said, adding that he was unsure of the specific demolition date.

The one-storey building occupied by shops was originally built by the government, however, many of the units have been modified and other structures unassociated with them have been built, he added.

“The reason this process is taking so long is because the building used to belong to the government, which makes it more complicated for us to try to demolish it,” Mr Ma-ann explained.

Governor Nisit added that he and other relevant officials would put into writing the official new post-cleanup beach rules as soon as possible.

The governor announced on Wednesday that the regulations being tested at Patong Beach – with registered vendors being allowed to occupy 10 per cent of the beach – would become the standard for all Phuket beaches (story here).

“We will wait a little while longer to make sure that we have everything worked out so that we don’t have to go back and change things again. That always leads to confusion,” he said.

“I cannot say when exactly this will happen, but I promise to have it done as soon as I can.”

In closing, Governor Nisit expressed his approval of the results of the beach cleanup.

“The situation is slowly getting better. Almost every beach is neat and in order once again,” he said.