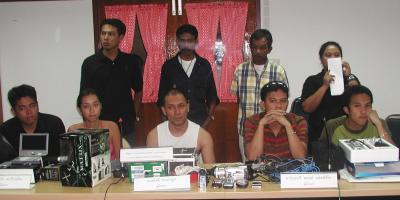 KATHU: Police on Monday arrested four men and a woman from the Philippines for using a fake credit card to buy expensive goods from a mobile phone shop in Patong.

However, K. Patchar did not have the mobile phones in stock, and asked them to return later to collect them.

She called the Credit Card Center of the Thai Military Bank, which issued her shop with a credit card transaction machine, and was told that the card number was genuine and was issued by a bank in the US – but not CitiBank, as was indicated on the card presented by the Filipinos.

“K. Patchar then called the police at 9:45 pm. Undercover police went to her shop and arrested three of them when they returned to collect the mobile phones,” Col Chalit said

Col Chalit said that Ontanis claimed to have bought the fake card in Bangkok for 6,000 baht.

All five were charged with six counts of fraud. If found guilty, they face up to three years in jail, or a fine of up to 6,000 baht, or both, on each count.