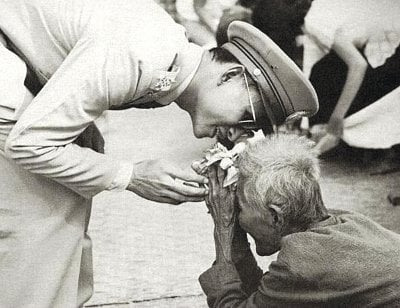 Looking back in time, the circumstances surrounding HM King Bhumibol’s 1946 ascension to the throne couldn’t have been more remarkable.

Born the second son to Prince Mahidol of Songkhla, the brother of King Prachadhipok (Rama VII), neither the King nor his elder brother Ananda Mahidol were in any way expected to be part of the long line of the Chakri Dynasty that had ruled Siam since 1782.

His father, Prince Mahidol na Songkhla, was the heir presumptive but when he passed away and the childless King Prachadhipok died in 1935, the crown was, by law of ascension, bestowed on Bhumibol’s elder brother Ananda when he was 9-years-old. However, when King Ananda died in 1946, the crown was once more passed on, this time to his younger brother, the present King Bhumibol. He was 18 then.

HM King Bhumibol returned to Switzerland, where he had lived since then, to study law and political science and his uncle, Rangsit, Prince of Chainat, was appointed Prince Regent.

HM the King returned to Thailand in 1950, when his coronation took place. His full name – Bhumibol Adulyadej – means ‘The Strength of the Land: Incomparable Power’. HMThe King is a great achiever. He has been called the revolutionary king, the reformist king, the development king, the jazz king (he has composed no less than fifty songs), and the people’s engineer. To the Thais however, he is known fondly as “the Father of the Nation,” or Por Luang.Indeed, his birthday is also celebrated as a Father’s Day in Thailand.

Having a lifelong interest in agriculture, HM The King has developed agriculture-related projects that include soil management, drought and flood mitigation, and wastewater management, among others.

A gifted inventor, the King has engineered modern and cost effective machines to solve difficult farming and environmental situations such as the Royal Rain and the aerator for polluted water, for example.

But for the Thais, he is most renowned for his philosophy of Sufficiency Theory or setsakit por pieng, that he proposed to the nation during the economic crisis in the late 1990s.

Sufficiency Theory advocates a livelihood of moderation and a development model based on small incremental steps devoid of high risks or speculations.

Giving a definition, HM The King says: “…Self Sufficiency doesn’t mean each family has to grow their own food or weave their own clothes. That is too extreme. In fact, it could mean wealth as long as the money earned is not the result of exploitation of others…”

During the two decades of its application, setsakit por pieng has become the byword for many Thais who genuinely embrace the concept and successfully apply it to their lives. While the foreign press is happy to point out that HM King Bhumibol’s wealth based on assets held by the Crown Property Bureau (oblivious to the fact that the resources of the Crown are passed on from monarch to monarch, and don’t belong to the King alone). As for the argument that the Sufficiency Theory flies in the face of the King’s wealth, many farmers up and down the country will tell you otherwise.

Thamrong Jaibut, farmer and member of Khao Hin Sorn Development Education Centre, says: “Our community is now strong because we are united in our aim to be self reliant. We pool our resources and do not exploit others. We lead simple and economical lives. When we are focused, wisdom comes. HM The King’s theory is not only applicable to farming but to other areas of life as well. It actually teaches us that to sustain our livelihood, we must also be good citizens. The result of the Sufficiency Theory is that small communities can be the building blocks of a secured nation.” *

In 2006, on the 60th anniversary of his rule, the Unites Nations Development Programme (UNDP) presented to HM King Bhumibol the first Human Development Lifetime Achievement Award in recognition for his tireless work. In his speech accompanying the presentation, UNDP’s then Secretary General Kofi Annan credited the King with “extraordinary contribution to human development,” and called him “the world’s Development King, who reached out to the poorest and the most vulnerable people of Thailand regardless of their status, ethnicity or religion.”

Since 2005, HM The King has been residing at Siriraj Hospital due to health issues. This has in no way prevented him from doing his “duty”, as he still receives government and foreign dignitaries, reads, writes and plans more development projects.

The whole nation looked forward to his customary appearance and speech at Ananta Samakhom Throne Hall in the Grand Palace today.

The Thai people hope that in this time of fragmented and partisan politics, a father’s words may help ease anxieties, erase doubts and confirm beliefs. Most of all, they hope that HM The King will work his usual magic and through his speech unite the nation once and for all.