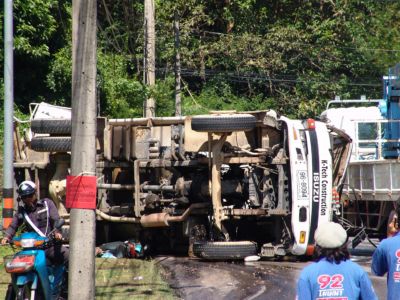 KATA: One motorcycle rider was killed and several motorists were injured when a water truck careened into traffic and overturned by Ban Kata School on Kata Hill, at around 2 pm on November 10.

The K-Tech construction company lorry collided with two cars and a motorcycle, trapping the bike and its rider, Kittipong Aiyarak, under it. The injured man was rushed to Vachira Phuket Hospital in Phuket City but later died.

The driver of the truck was injured in the collision and treated in hospital. Police have arrested him on a charge of negligent driving resulting in death.