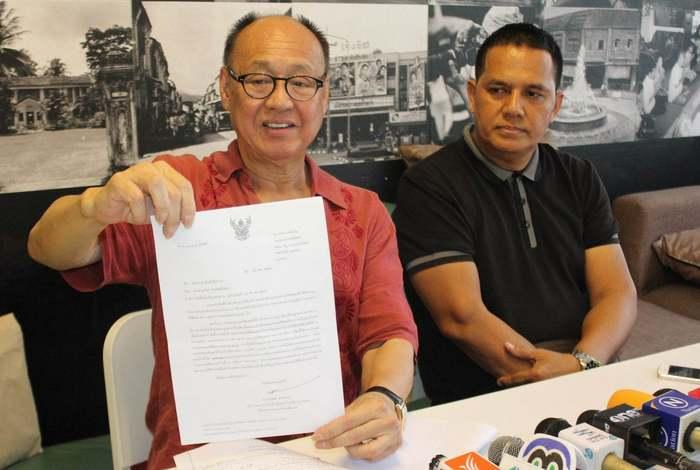 PHUKET: The alleged owner of 24 rai of land on Naka Noi Island yesterday filed a criminal defamation lawsuit against a famous Thai actor involved in the land dispute on the small island off Phuket’s east coast.

The owner of Six Mountains Co Ltd, Chanwit Kitlertsiriwattan, who bought the land in 2014, claims that allegations made by the actor could cause serious damage to him and his company.

“The Facebook post about gunmen and a backhoe clearing the land can negatively impact our company, especially as neither of the claims is true,” Mr Chanwit said.

Puri Hiranprueck, whose family owns the vast majority Naka Noi Island, brought the case about the suspicious land document to the Department of Special Investigations (DSI) about four years ago.

Then, in 2014, SorKor1 #70 was upgraded to a NorSor3Kor for a plot of land on Naka Noi, explained Lt Col Prawut Wongseenin, director of the DSI’s Bureau of Consumer Protection and Environmental Crime.

On July 30, the same day that the land document was upgraded, it was immediately sold to Six Mountains Co Ltd for more than 42 million baht.

However, the NorSor3Kor that Mr Sayan presented to officials this week is for a total of 24 rai.

“We have all the necessary documents. I don’t know whether or not the NorSor3Kor was unlawfully issued. However, I believe the officers. Since they confirmed that it was legal when I brought it to them, I was comfortable buying it,” Mr Chanwit said yesterday.

As the DSI is investigating the case, Mr Puri alleged in a Facebook post that he had gone out to stop a group of men hired by the landowner from clearing the forest.

“A group of men with guns, claiming to be hired by the land owner, were about to clear the forest, which is home to our precious hornbills. The land itself [sic] is in the process of being revoked, as [it’s documentation] was unlawfully issued. We went to stop them, but they threatened us with guns,” (story here).

The allegations made in the post are part of the evidence that Mr Chanwit presented to officers at the Thalang Police Station yesterday morning.

Vice Governor Chokdee Amornwat checked the area earlier this week and found no evidence to back Mr Puri’s claims.

“As they are the legal landowners, until proven otherwise, there is no issue with them developing their property. No court order preventing them from doing so has been issued.” V/Gov Chokdee said.

However, Mr Chanwit said that he would stop any development on the land until the documents’ validity was verified.

“There is no need for the DSI to ask military officers to step in and invoke Article 44. We are fine with waiting for the court’s verdict,” he said.